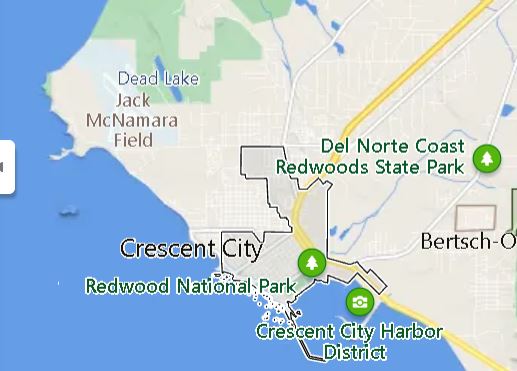 Today is a crisp six degrees Fahrenheit, not something we see in
Crescent City very often, but as we ascended the Rocky Mountains in
Wyoming it got ten degrees cooler.  In the meantime Western Nebraska
and the tiny town of Sidney was our beginning for the day.  Windy and
breathtakingly chilly, but very little snow. Seems that California
isn’t the only place in the world that is a bit shy of the wet stuff.
Talking to one of the locals, who loves the cold by the way, I asked him
where all the homeless were hiding.  Seems like when it comes to
“rural”, only Crescent City and Del Norte County have such an
unmanageable problem with homelessness that sales tax revenue is
employed to provide trash pickup for them.  But hey, just one more
example of the “luxury” of living in a State where the government will
do almost anything to keep the “Walmart Shoppers” paying the freight”
for just about anything that Supervisor Starkey can come up with.

Sidney is a tiny town, slightly larger than Crescent City, with a
population of about 6,800 people and growing.  It originally was formed
as a sub terminus of the Union Pacific Railroad, and had Federal
Soldiers stationed at nearby Fort Sidney to protect the railroad and the
local community.  Unlike Crescent City it is a prosperous wheat and
cattle ranching community, that continues in a tradition begun with its
founding in 1857 as a rail stop for agricultural products going to
market.  It is also the County Seat for Cheyenne County about 14 miles
above the Nebraska/Colorado line.  It along with many of the small towns
along the highway also have a thriving tourist economy for the summer
months and hunting keeps it going into December.  It is also a place
when cell service is spotty and the internet as well.  After a quick
tour of town, we head towards Cheyenne, just across the border in
neighboring Wyoming.

By the time we reached Cheyenne it had warmed to a toasty 21 degrees ,
so we removed the winter weather gear to take in a local museum
featuring horse drawn carriages, one of the many products produced in
the area from the 1850’s until part way into the twentieth century.
Seems that there were multiple manufactures, that produced a wide
variety of carriages to suit just about any application.  Wild west days
and cowboys were also on prominent display in the museum that turned out
to be just one of the many things available to do in town.  Running
short of time, we put Cheyenne down as one of the many places in the
Midwest to return for a future visit, then hasten on west through the
high plains of Colorado.  I must say that even without many trees,
California doesn’t have a lock on beautiful places in this Country.

We have taken several side trips off the highway for a cruise through
small town America, featuring many of the main street visions,
reminiscent of one hundred and fifty years ago.  It is a liberating
feeling to see smiling and open faces, unfettered by much of the angst
that is quite evident along the West Coast, at least in its Urban
Centers.   They have moved on from the past couple of years with little
evidence that the pandemic affected them and do not suffer much from
homelessness, poverty, or crime. Most are more concerned with inflation,
and lack of employees to continue fueling their growth.  In any event we
end the day in Evanston, Wyoming, another growing Midwest town of about
12,000 souls.

Day Thirty finds the outside temperature at a vapor exhaling temperature
of four degrees.  We are told when we finish the day in Nevada, it will
be back up over freezing. In any event I do not recommend licking
anything metallic.  Evanston is another mall town delight where we take
in the local scene for an hour or so before heading up over the pass
into Salt Lake City.  At the summit and Continental Divide a spectacular
sight greets us as we gaze out onto the Great Salt Lake.  Flat as a
pancake as far as the eye can see.  It has also dipped below freezing at
a negative two degrees, but the sun is out and the Land Cruiser Museum
in Salt Lake is our first stop.  Another car crazy paradise, with Land
Cruisers from their inception to the latest model.  It is also home to
the Seven Continent Crew, whose vehicles are on display after hundreds
of thousands of miles travel across all seven continents.

Again we do not have enough time to do the City justice, but wish to
catch the displays in Provo before heading for Nevada.  Provo, in its
downtown area has created a shopping and tourist activity mecca.
Provo’s former grand Union Station has been converted into a series of
museums, including the station, with a large model train display, the
Browning Arms Collection, a luxury vintage car collection by a local
collector, and the station’s rolling stock found outside.  Very
inexpensive fee to see all the collections. Lunch at a local watering
hole on 25th Street, where we were regaled by the owner about the
history of the street and his bar. The tale of the clock with two bullet
holes in its face, proudly on display above the bar.  You have to
understand that before the Mormons came to town it was a pretty lively
place.

On past the Bonneville Salt Flats, beautiful but desolate, then up over
the mountains into Nevada.  We spent the night in Winnemucca, Nevada,
which surprisingly was full of not only gamblers, but numerous hunting
parties.  Checked in to our stop for the night then headed into town at
the recommendation of the clerk at the front desk for a bite to eat.  A
lot like the larger gambling meccas of Vegas and Reno with its strip of
lighted Casinos, but somewhat more manageable.  One thing we have
noticed is that all of these places that are often off the beaten track,
all have plenty of variety when it comes to things to do.

Our final day of this road trip finds us early to a local breakfast
spot, appropriately named the Griddle.  Amidst hunters, locals, and
tourists, we wedge ourselves into a booth for a last hearty breakfast,
before making the last five hundred mile sprint home.  I have been many
places in the United States, but this is my first time in Northern
Nevada, and Southeastern Oregon, but what a place.  Gorgeous vistas,
winding canyons, and isolated ranches all covered in the first snows of
this winter.  Frozen creeks in fantastic shapes tucked around many a
bend.  Roads as straight as an arrow, then steep winding grades up and
down, that give adventure its name in spades.  We pop out once again in
Lakeview, Oregon for a stop to fuel up as gas upon reaching the West
Coast is closing on $5.00 a gallon.  Everything was inflated across the
Country, but nothing like good old California where everything seems to
be a minimum of twice as much as most every other place we went.   As I
remember, in the twenty five States we traveled within, only Michigan,
Nevada, Arizona, and Oregon approached the rarefied heights of inflation
found in California, and even there prices were much less than at home.

Skirting Klamath Falls, then Medford for dinner, a last fill up at
Costco, then the remaining one hundred twenty miles home. Darkening as
we approached the Agricultural Inspection  station, through Collier
Tunnel, and down the winding Smith River Canyon to finish up our month
long trip.  While some visiting was part of the intention along the way,
reconnecting with all this Country has to offer was an integral part of
the trip.  As such, historical locations visited along the way gave us a
much needed reminder of what this Country was meant to be all about.  In
several future articles, I will attempt to convey what we discovered.
Whew, this was quite an adventure.

2 thoughts on “On The Road Day Twenty Nine, Thirty, And Thirty One”