$1.9 TRILLION “COVID-19” BILL is mostly to pay for things other than Covid related. 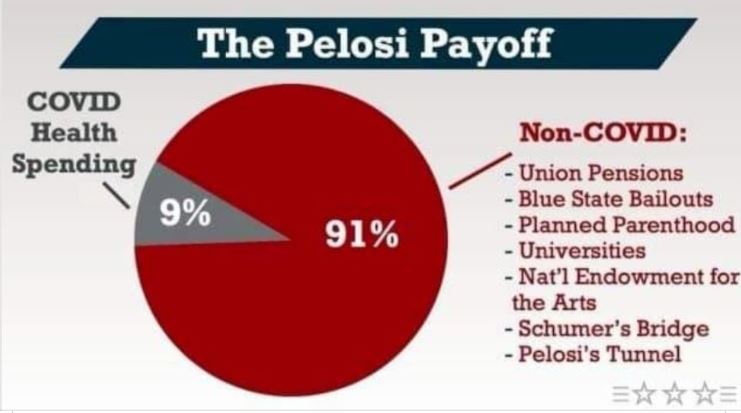 Senator Ron Johnson, Republican from Wisconsin, demanded that the Senate Clerk read every page of the 628 pages of the nearly $2 trillion bill Democrats are pushing.

Remember Obama’s Affordable Care Act in 2010? Unlike House Minority Leader Nancy Pelosi saying,” You have to pass the bill to find out what is it in…” our elected politicians are actually spending the learn what is in this one.

Sounds like they are earning their money because I’ll bet dollars to donuts that bill is chock full of expenditures that most of us don’t want to pay.

Senator Johnson talked about a $19.5 Billion bill introduced by the Clinton Administration in 1993 that got whittled down to $4 billion after deliberating for 12 days.

Further says Sen. Johnson, $$4 trillion dollars was already authorized last year and $1 trillion of that has not been spent. So, why add another $1.9 trillion? He wants “to shine a light on this abusive and obscene amount of money that’s going to further mortgage our children’s future.”

Meanwhile, the Democrats have taken out two asks in the bill: the bridge in New York and the train in California from the $1.9 trillion. Now, how many other “pork” related expenditures are there that could be removed and will ultimately be removed?

Sen. Johnson brought up a good point. Do they even need to authorize another multi-trillion dollar bill when they haven’t even spent $1 trillion from last years bill?