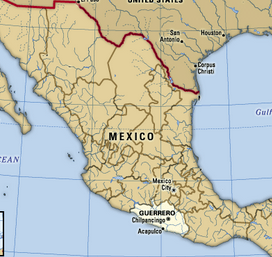 A year ago, 100 students from an all male rural Mexican college traveled to Iguala, Guerrero to protest discriminatory hiring practices of teachers. Many of those students are dead or missing and that event has caused the dramatic loss of popularity for Mexican President, Enrique Pena Nieto.

While the government said the September 26, 2014 attack was a case of mistaken identity, the report from the Inter-American Human Rights Commission  (the Commission) said the violent reaction to the students, who were hijacking buses for transportation to a demonstration, may have had to do with them unknowingly interfering with a drug shipment on one of the buses. Iguala, where the attacks took place, is known as a transport hub for heroin going to the United States, particularly Chicago, some of it by bus.

During the past year; teachers, parents, students and friends have held demonstrations and protests throughout cities in Guerrero, some violent involving burning of government buildings and setting highways ablaze.

Parents fear their sons were killed but hold out hope that they may still be alive.

The report by The Commission points out so many discrepancies from the government’s investigation. It is an indictment of Mexico’s investigative procedures and conclusions, and cites key evidence that was manipulated or that disappeared.

It reminds me of the BlackHawk Pistol story.  This weekend, I received a DVD of the August 18, 2011 raid on Dave Egan’s house.  It was 2 minutes and 35 seconds long. My initial request for the video was sent to the DA’s office, the Sheriff’s office and County Counsel in April, 2014. What happened to the rest of the video?  The Del Norte Sheriff’s department has 43 video recording devices. About a dozen officers took part in the raid, and all they would release was 2 minutes and 35 seconds.

The other point of this story is about discriminatory hiring practices of teachers. It has come to this reporter’s attention that Del Norte County may suffer from biased hiring practices as well. Complaints of cronyism once again.

HAVE THINGS CHANGED IN IGUALA IN THE LAST YEAR?

It appears that the Mayor instructed his police force to intercept the students buses in an effort to divert them from protesting and ruining his wife’s chances for her mayoral bid.  It is said that the police turned the students over to a drug gang.  Citizens complain that police abuses are far too common and almost always go unpunished.

Except that things have changed in the last year. The Mayor of Iguala and his wife, who fled to Mexico City, have been arrested along with 22 Iguala police officers, the Iguala police chief remains a fugitive, and the Governor of Guerrero resigned.

Sadly, the students are still missing and feared dead.