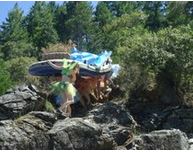 As the Super Heros helped the Super Fairies down the rugged pathway to the river, the villains were staged in the shade anticipating their moves; to overcome and take control on the river. No need for the Fairies to worry because the Super Heros had back-up with the Star Trek Enterprise to oversee the river trek.

Those were some of the costumes that participated in the Gasquet Raft Race. Over 200 registrants racing to the end in hopes to take a prize. There were a total of nine categories, dividing age groups, rafts with oars, hand paddling, best decorated and best raft. Did I mention the weather could not have been better and the water was refreshing?

Music was provided by Border Brothers and Eye Candy. A total of 68 prizes were auctioned off for raffle. There were a variety of venders.  The menu of the day consisted of, braised chuck roast that had simmered in a deep pit for numerous hours, cole slaw, baked beans, and garlic bread. Taylors sausage and hot dogs came in for second, and a good ole fashion chocolate cake for dessert.

The winners of the raft race were announced at 4 p.m.. The best decorated was awarded to the Super Fairies and the Best raft went to Star Trek Enterprise. This year the other 7 categories had First place prizes only, but next year there are plans to have 1st, 2nd, and 3rd prizes. Jina Bowen and many other volunteers were in charge of this successful event. The money that is made from this family oriented fund raiser is utilized in the Gasquet Community. Last year the American Legion was able to replace a roof for the fire department, and buy a much needed generator.

Plans for next year are to get the advertising out much sooner, placing special emphasis on costumes. The more outrageous the better and it is so much fun to see the costumes.