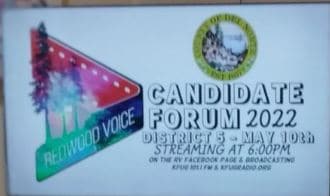 I wish to acknowledge ALL candidates who participated in tonight’s Forum. Thank you for your service.

The dais was crowded but all candidates for the Dist. 5 Supervisor forum at the United Methodist Church found a seat and responded to Panel questions.

In order, Governor-appointed SUE MASTEN delivered her opening two minute statement. Masten cited her 40 year political career in activism, her quest for a ” fair share” of soon to be dispersed Federal infrastructure grant funding and… “bringing diverse parties to the table.” This Masten theme of bringing parties to the table was repeated several times throughout the evening.

Former Del Norte Sheriff DEAN WILSON was up next and after paying homage to recently passed away Supervisor Bob Berkowitz, cited his 23 year career as a Crescent City Police Officer and 12 year (three term) career as Sheriff, his experience of understanding the County budget, and heaped enormous praise for those he has worked with and supervised over his long career.

DAVID JONES, current Klamath Chamber of Commerce president and retired Building Inspector acknowledged his recent service on the Redistricting Committee and shared his vision to be the voice of change on the Board, if he is elected.

DAVID MARKEL, current president of the Bertch-Oceanview Water District stated, “Del Norte is in need of immediate BOS change, cited poor conditions of Dist. 5 roads and shared his concern Dist. 5 has been ” neglected by the County. He also stated he’s not a politician but if elected, he will place the interests of his constituents above all else.

Panelist Dan Schmidt of The Triplicate posed the first question and asked all candidates what County Dept. received more than its fair share of the 21/22 Budget.

No candidate actually answered the question. All candidates delivered answers without acknowledging which department was delivered more money than it deserved.

Masten did not answer the question but identified the County is “In Crisis” and the need to bring people to the table is imperative.

Jones spoke about Measure R as under-funding the DNSD.

Markel cited Measure R as a job killer, too much of our tax dollars fund wasteful government and the need for our local governmen’t to live within its means.

Panelist Marie Camarena asked the question of how to address mental health needs in the County. Responses were remarkably similar acknowledging the severity of the problem with no quick fix. Candidate Jones did cite the need for the religious community to provide assistance to this complicated issue.

Panelist Schmidt asked about the abundance of State and Federal grant money and should the Board reject some of this ” free money.”

Candidate Wilson stated the Board should reject some of the Consent Agenda items, pending further studying the consequences of accepting ” strings attached ” funding.

Jones stated grants are not the answer.

Without addressing the issue, Yes or No, candidate Masten cited the success of Hope Village in Medford and the need to develop working partnerships with all parties and again referred to bringing diverse groups to the table.

The most significant issue of the evening asked each candidate to give a YES or NO response to the removal of the FOUR dams along the Klamath River.

*Wilson NO for removal

* Markel NO for removal

*Colton Undecided for the majority of her answer, then indicated YES for removal.

Unfortunately, there was no posed question on the removal of the Red Mountain radio telecommunications system, in respect to Yurok Tribal heritage but this removal has caused considerable concern to emergency communications services.

It is indeed challenging to cast your vote based on a few snippets from one candidate forum. There’s always more we can learn about a candidate. Many of you have just received your ballots. I would recommend you hold off with a quick ballot entry at least until after this week’s Del Norte Association of Realtors candidate forums.

My grading for tonight’s District 5 Forum is based on the following criteria: