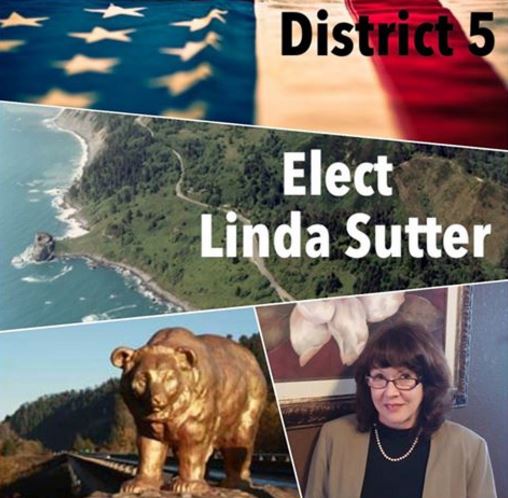 My name is Linda Sutter and I am not a “Professional” politician. I have written for the crescentcitytimes.com on a variety of subjects over the years and at this time want to introduce myself to you.
As a single mother of two working in the capacity of a Correctional Officer, I managed to attend College and graduate from College of the Redwoods. Later after retiring, I returned to UC Davis for the paralegal program, and Humboldt State for the Mediation program.
I have lived and worked in Del Norte County for 25 years. Nothing much has changed, and the issues facing Del Norte County 25 years ago are still alive and well today. Poverty is one half of Del Norte County’s population, and no discussion by any supervisor to change that reality.
We have one of the fastest broadband internet systems on the West coast, which could result in a fast growing industry such as call centers, collection centers, and billing statement facilities or insurance claim process centers. All provide viable living wages. Cannabis is another industry on the horizon, and we don’t want to be left behind when it is voted in.
Currently Brookings Oregon has three marijuana dispensaries. Each one pays the State of Oregon $9,000-11,000 per month. Brookings made the mistake of not getting their tax attached and now has to get voter approval to receive a 3% tax on the marijuana sales. Is this what we want to happen to our County ? The city already banned the sale of recreational marijuana within the city limits, which, in my opinion, was a mistake. It was a mistake that should be rectified before the new law is passed by the people. The State of Oregon Currently makes $3.48 million dollars a month off of the sale of recreational Marijuana.
The Native Americans are a sovereign nation and should be respected as such. Their rivers and fish will be protected, and I support the development of a teen center that will endorse strong, educated, and confident members.
The hot and complex issues facing Del Norte County today are the Last Chance Grade and Sutter Coast hospital. The Last Chance Grade is dangerously approaching its last leg. CALTRANS says it is safe to drive, however, the construction workers say it is dropping at a rate of 4 inches a day. Is it safe? Why haven’t our supervisors made a grand stand to the appropriations committee? We all pay our taxes, yet our County is at the bottom of the barrel to get things done. That is not ok with me and I will make a GRAND STAND, if that is what it takes.
Why haven’t maritime transportation been looked at as a means of travel, that would be more effective and bring more full time jobs as well as character to our county?
Sutter Coast Hospital made $10.8 million dollars in 2014, well over the amount they are allowed to make as a non-profit hospital. SCH, recently fired medical staff for no other reason than to attempt to gain critical access even though Mr. Hana says they are not. It is time for our County to hit them in the pocket book, take away their welfare exempt non-profit status, and begin recruiting another provider with doctors that will allow affordable medical treatments. It is time to bring in infusion centers, and dialysis centers so our sick do not have the stress to travel for these treatments delaying their much needed treatments.
As a Certified Paralegal, I have a strong background in legal research and would be an asset as your 5th District Supervisor. In order to understand and get to the meat of the issues at hand, you have to understand their legal perspectives. I have ambition, drive, integrity, and commitment in getting the job done. It’s time for new industry, less poverty and less red tape.
Its time to vote for Linda Sutter, a fresh, new, perspective.