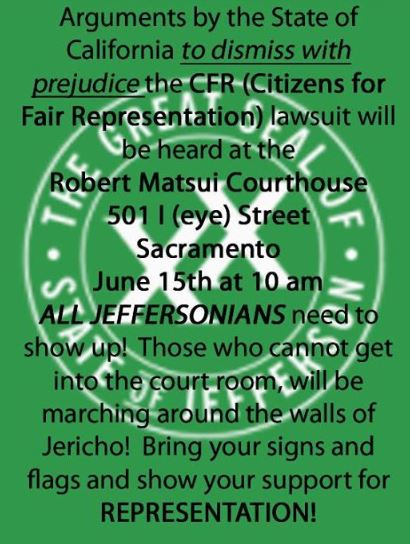 California is irreparably broken.  We need to break up the state, if for no other reason but the restoration of Liberty to those parts of the state with the ability to restore It to their citizens.  23 Counties have already signed Declarations and Petitions to withdraw from California under A4 sec 3 U.S.  Further, Citizens for Fair Representation, (Jefferson Formation C4 and other plaintiffs), has filed suit in Federal Court against California, (CFR v Alex Padilla), for lack of representation and dilution of vote.

The founders of California intended and instituted a form of legislature which grew with population.  The Legislature capped itself in 1879 at 80 Assembly and 40 Senators.  150 years and 39.5 million people later not one single representative has been added to the people’s branch, while the other two branches of government have grown like unaccountable and uncontrollable weeds.  As Thomas Paine put it, representation must grow with population,  so that every part of the colony remains adequately represented.  That representatives remain connected to those they represent and are never allowed to develop an agenda separate from their constituents.

Article 2, sec1 Cal Constitution…….All political power derives from the people.  We need to instruct people that protection of Rights is the only proper and just role of government…..anything else is “wrong”.

This is nothing less than a battle between our Rights vs the Wrongs of a corrupt and unaccountable government.

If our lawsuit prevails, we will yank the rug out from under status quo politics in California and perhaps the Nation, see 28 USC 2284 or McManus V Shapiro.
Our main stumbling block is a corrupt federal judge who has consistently refused to order a three judge court.  If we manage to get past her, this case will be heard by the Supremes.  Our case is starting to attract attention.  We need more!!
We can restore Liberty,  but we need the help of anyone with expertise and knowledge of media, law or Constitutional law.  Spreading our message is key.  We need to reach people outside the north state.
Mark Baird
Jefferson Declaration Committee spokesman

This is a recent article about the LaVernge case being heard in Washington DC.  This case reflects on our own case and could have a huge effect on it.

“Nothing would drain the swamp more quickly or more completely than a Congress peopled by representatives in districts small enough for grassroots energy to defeat big money, media consultant driven politics as usual.

Talk about getting money out of politics!”

NOTE FROM Sally Rapoza: email rallysally@freedompatriots.net – Should you decide to go to Sacramento to support the Citizens for Fair Representation lawsuit, be aware that due to the changeable nature of the court, there will not be a bus available to Sacramento (no one wants to get stuck with the bill if there is a cancellation!)  Please plan to drive down or carpool.  If you are willing to drive and take others to share the gas and parking expense, or if you are willing to go and share gas and parking expenses, please get back to me and I will try to arrange rides.  Bring your signs and flags!  Thank you!