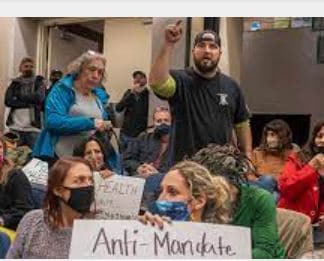 It is not often in the world of Del Norte politics and especially in
various Board meetings that there is any chance of differing opinions by
board members.  We have become used to 5-0 votes on most topics up for
board approval, so it was with some amazement when witnessing the most
recent School Board meeting that there were actual differences of
opinion and something other than a zero on one side of the tally.  It
may be too early to tell that perhaps some elected officials are
beginning to tumble to the fact that they represent a constituency
rather than the bureaucracy that is supposed to do their bidding.   A
lesson that all Boards, Authorities, Councils, and Commissions need to
have driven into their collective personalities.

The Del Norte Unified School Board consisting of Don McArthur, Board
President, Charlaine Mazzie, Vice Chair/Clerk, Jaime Forkner, Angela
Greenough, and Frank Margarino entertained a lively crowd of mostly
parents for over seven hours at the evening event.  Beginning with
opening ceremonies, a closed session, more ceremonies, a ceremonial
proclamation on Self-Injury Awareness Month, and a special presentation,
the Board moved quickly to various reports by Board Members, a Student
Member report, the Teacher’s Union Rep had things to say, as well as the
California School Employees Association Representative.  Nothing of any
real note.

The meeting moved on to a LCAP Midyear report which essentially
indicated that LCAP funding needed to be spent at a slightly greater
rate as only a little over 40% had been spent by midyear. Administrator
Thomas Kissinger was asked why much of the funding appeared to be spent
on social and mental issues rather than education.  His response was
that these issues had been assumed by the education community to
facilitate student learning.  Curious response that our school system
has chosen to enter into student spaces that Health and Human Services
normally would occupy.  His response was, that those services were very
limited in a County of this size which seemed to validate his claim that
it was necessary for the school district to intervene for student
educational welfare.

Thus far 5-0 was the tone of the meeting.  The consent agenda, with the
removal of item “F”, Personnel Changes, a District Audit, and even an
Audit of the much publicized $25 million Bond operations received little
comment by the Board, a tongue lashing by a member of the public, Linda
Sutter, over malfeasance by Board conduct, and the 5-0 vote was intact.
An hour and a half in and nothing exciting to report.  Members of the
public were beginning to regret missing the evening’s preferred
entertainment, an episode of “Jeopardy”.  And then the other shoe dropped.

For the next five and a half hours the action for the Board liven up
immeasurably.  Item “C” on the Board’s agenda included a discussion of
mask mandates and a Board Resolution seeking to change school policy
regarding those mandates for students within school interiors.   The
Board member comments were preceded by a lengthy description by District
Superintendent Jeff Harris of the perils of lifting the California
Department of Public Health’s recommendations for masking in Public
Schools.  Discussion among Board members seemed to favor the resolution
already passed by 20 other districts with in the State in one form or
another to allow some form of a maskless environment in schools.
Comments in the public comment session which had in excess of fifty
commenters seem to split mostly along the lines of parents with children
objecting to the mandate and school teachers, union reps and school
employees wishing it to remain.  Arguments were spirited and lively,
often spoken with passion.

The end of the comment period seemed to have left Board members
undecided as to what the path forward for them resembled.  Divided as to
how to proceed, definitely a serious consideration of the alternatives,
the fall out for parents and teachers ensued with no clear winners.
Parents felt that teachers were misrepresenting mask effectiveness, and
the negative effects of masking on their children.  Teachers and their
union representatives countered with safety concerns, compassion for
others and the argument that children “did not mind wearing masks” in
the classrooms.  In fact according to two of the teachers, many students
wore theirs outside, which is not a current requirement in school
settings. Neither side seemed to be content with the other.  This left
the School Board continuing to seek answers that really didn’t
materialize.  This left a compromise that seemed to allow students to
unmask following a few steps at educational enforcement without penalty
which would allow the unmasked student to remain in class for
instruction beginning Monday, February 28th.  This was voted on a 3-2
basis, Don McArthur and Charlaine Mazzie dissenting.

While this seemed to resolve the item with regards to students, staff
masking was briefly discussed resulting in an almost immediate reaction
by employee unions and threats of filing grievances by those unions.
Teachers and their unions did not appear to be receptive of the actions
taken by the board.  Masking by teachers was then removed from
consideration and a special meeting was set for Monday February 28th at
4:30 to await the promised governor’s announcement on mask disposition
for schools. At that point the Board would take further action if necessary.

Item “D” included the potential approval of a second school bond to be
placed at the November 2022 election date.  Apparently, last Fall’s
survey did not encourage the District’s assessment of a 55% passage rate
which appears to be the current path the School Board has taken after
the fiasco produced by the previous  Citizen’s Oversight Committee’s
failure to perform properly.  Having a bond COC allowed the previous
bond to only require a 50% plus one. This has recently become a
contentious issue and energized a considerable reaction to the recently
proposed new bond.  Citing hard economic times and the unlikely ability
to “manufacture” enough support, the Board elected to pass on a bond for
the November election.

Shortly after the 11 o’clock hour, seven hours into the meeting, Chapter
1 funding plans were discussed.  Hopefully more production out of those
funds will occur within those plans.  Historically there hasn’t been
much progress to report from the additional funding from Chapter 1.
Student’s receiving the attention from that source typically showed
little if any improvement academically.

Moving into the home stretch, a representative from the Board to visit
the glorious urban paradise of San Diego for the biannual California
School Board Association meetings fell to Angela Greenough.  Plans for
future board agendas, upcoming union bargaining meetings and a few other
suggestions rounded out the meeting with only a very few of the fifty or
more members of the public remaining.

End results appear to be favoring a less draconian evolution to have Del
Norte County and California leave the few remaining states that require
masking in schools, eleven was the number reported.  And the tax payer
gets a break and will not have to wrestle with yet a new tax on their
properties when the Board nixed a new school bond for the Fall.

One thought on “A Seven Hour Marathon”