A Story for VETERANS DAY 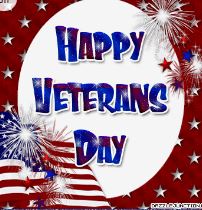 I was raised in the Midwest. At a very young age we were taught to honor our Veterans and when we would see the National Guard and other Military vehicles driving down the highway we were thrilled.

In my family my father was a Navy man, my brother was Army, and my daughter is a Marine. I never heard any stories from my father and brother about their military days and both of them passed before I had time to ask. However, My Marine gave a story I only learned about AFTER she had returned to the United States and during her Graduation from Nursing School.

Sara completed her Bootcamp training at Paris Island in South Carolina in the early part of the year 2001. After 9/11 she was shipped to Egypt for a training exercise.

One day she was at a market in Cairo with some of her Marine buddies when an Egyptian man approached them and begin to Barter with their CPL over purchasing Sara for 1000 camels. The Egyptian man wanted Sara for her green eyes.

Marines have a sense of humor and played along with the Egyptians to barter Sara, however, no agreement could be made because the CPL said there were not enough Camels for Sara.

Saying thank you for your service is not enough, but it is all I have. God bless all the men and women in uniform who sacrificed their lives for our County.

2 thoughts on “A Story for VETERANS DAY”