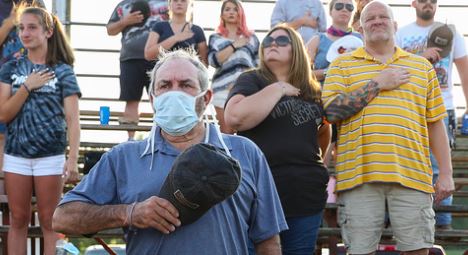 When I came to this area as a permanent resident now forty eight years
ago, I would have never guessed that what I experienced in my local bank yesterday was even a remote possibility.  Then again I have always
assumed that most adults would at least attempt to resemble adults.   I
learned a bitter lesson in the lobby of that business I have patronized
for more than three decades.  It wasn’t the fact that the business has
now been forced to hire a commissar like block warden to vet customers
coming into the bank, no she was just doing what she was paid to do.  It
wasn’t even the fact that I was turfed out without being able to
complete my business, by a bank manager of whom I have great respect
for.  No, it was something in the conversation that I had with her prior
to being asked to leave the business.

During the course of our conversation I was informed that we have in
this community, the lowest of the low.   Adults behaving in such a
reprehensible fashion that even the convicts at Pelican Bay have more
laudable character traits than they have.  Hard to believe that adults
in this community have been unable to get past the behavior of ten year
old children.  I was informed that the reason for the “block warden” was
that somebody had “snitched” to the County’s Health Department that the
bank was allowing the occasional customer in with out wearing a mask.
These informants should be publicly revealed and ostracized from polite
society.

Earth to the person who thinks that they are morally superior to every
one else in this community, nobody is breaking a law by not wearing a
mask in public……..  One does not exist.  The mandates used in this
state to require mask wearing are based on emergency application of
Public Safety codes of which there are a number of constraints placed on
its application.  I very much doubt that those constraints have been met
for most of the residents of this County.  Law enforcement would be
unlikely to cites offenders, as their time in much more important in the
involvement with real crime.

Since this “Pandemic” circus began in this County less than one hundred
positive tests occurred before the mask mandate in June. In the
remaining six months of 2020 with the mask mandate in place and followed by a majority of the local population, the County has experienced nearly eight hundred additional positive tests.  Even if you believe that the current tally of one thousand positive test results represent one thousand individuals, it pales in comparison to the number of people that were previously infected with either the common cold virus or the common flu virus.  These numbers during a normal season, September to May, could easily reach up to 10,000 to 15,000 cases annually just in  this County. Funny how those two viruses magically disappeared in February of 2020.

What I and others should find particularly galling is that people who
may be susceptible to serious consequences from the Covid-19 virus seem
to believe they have no personal responsibility to protect themselves
from being infected.  For some reason in today’s dystopian society it is
everyone else that must protect them from their decision to come in
contact with the virus.  There have been an excess of warnings and
preventative measures offered which should eliminate the possibility of
contracting the virus with out impacting everyone else’s life and
livelihood.   Less than five percent of people who contract Covid-19
experience serious debilitating effects, most of which stem from serious
health issues known to those who have them.  Why exactly are the rest of
us forced to walk around like train monkeys wearing masks, when most of those most susceptible can’t seem to take responsibility for protecting
their own health.  Doesn’t a half million purported deaths resonate with
any one any more?