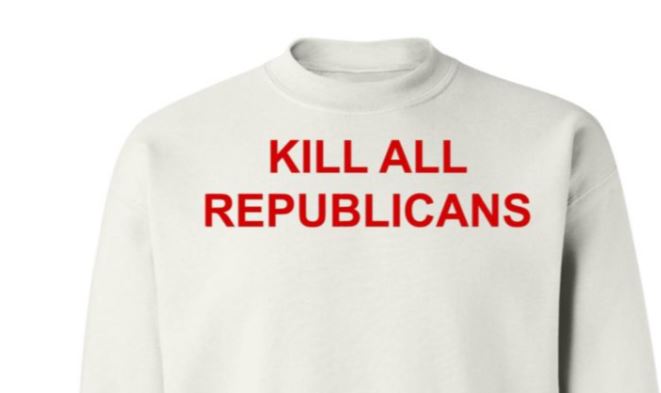 Amazon has terminated its hosting contract with Parler, claiming that language users posted to the social media platform might “incite violence.” The tech giant, however, hosts merchants on its own website selling products that many would say could incite violence, such as a t-shirt reading, “Kill All Republicans,” and a mug that reads, “Where is Lee Harvey Oswald now that we really need him?”

One product, sold by the vendor Florence & Partner, is a black t-shirt, which reads, “Kill All Republicans.”

Another product on Amazon is a coffee mug, which reads, “Where is Lee Harvey Oswald now that we really need him?” with “Trump” featured in the title of the merchandise. And then there’s the “Donald Trump Knife Rack,” which is marketed as “the perfect gift,” featuring the head of President Trump filled with steak knives. It’s also labeled as “the exceptional conversation starter.”

A fourth product, entitled, “Municipal Waste Donald Trump The Only Walls We Build are Walls of Death,” is a t-shirt featuring an image of President Trump killing himself with a handgun.

Another product is a Halloween decoration resembling a decapitated head of president. “Be terrified of this life-size decapitated dead zombie head and its mangled face and bloody neck,” reads the listing.

Amazon also sells merchandise that one could use in a riot, such as tasers, brass knuckles, and stun sticks. Among the deaths on January 6 included police officer Brian D. Sicknick. Meanwhile, Amazon is selling more than 100 products containing the slogan, ACAB, an acronym for “All Cops Are Bastards,” and a rallying cry popular among left-wing rioters.

Amazon’s own terms of service state that the company “does not allow products that promote, incite or glorify hatred, violence, racial, sexual or religious intolerance or promote organizations with such views. We’ll also remove listings that graphically portray violence or victims of violence.”

Some of the examples of products that Amazon claims to prohibit include, “products that promote, incite, or glorify hate or violence towards any person or group.”While Amazon is hosting merchants that are selling products in violation of its own terms of service, the tech giant accused Parler of hosting content that may “incite violence,” in order to justify knocking the site offline.

Parler says that Amazon’s decision to take action against the site was not motivated by a concern for public safety, but rather, “political animus,” as the tech giant booted Parler just two days after Twitter permanently banned President Trump from its platform, and while conservatives began fleeing Twitter for Parler.

In an antitrust lawsuit filed against Amazon on Monday, Parler adds that an Amazon Web Services (AWS) representative “repeatedly asked whether the President had joined or would join Parler now that he was blocked by Twitter and Facebook.”

Amazon did not immediately respond to Breitbart News’ request for comment on whether the company has any plans to terminate merchants with products on its site that might incite violence, given that it terminated Parler over users’ language on its site. Following Breitbart News’ request for comment on Thursday afternoon, Amazon began removing some of the products mentioned in this story.