And The Gaslighting Continues 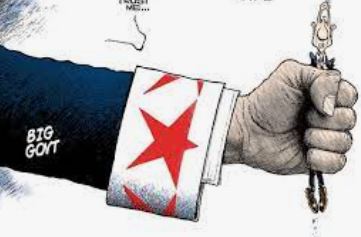 One would think after years of declining service and an ever growing
government that local voters would tire of promises made and not kept.
At some point they would grow weary of the excuses every time money is
received and squandered on things that make little difference to those
that government is meant to benefit. So, I suppose the recent efforts to
gas light the community in the run up to voting for the repeal of
measure “S” and “R” by voting “YES” on Measures “T” and “U” on November
8th by City and County elected representatives will definitely begin to
ratchet up into a crescendo of wailing “poor me”.

It is sad to note that few in local government truly understand the
hypocrisy of raising taxes to increase government spending at a time
when citizens can least afford it.  The notion that ALL employees for
both the City and County must be given raises at a time when most in
their communities are struggling to survive. The pale argument that the
raises are “necessary” to retain employees and compensate them
“appropriately” compared to who exactly?  Most who occupy the many
service related jobs in this region cannot claim to equate what they
earn to the lowliest paid employee in either the City or the County,
prior to the most recent round of generous raises.  Now it is without
question that both the City and the County have made it much more
difficult for the private sector to compete for the few employees that
remain to be had.

County and City governments are not the only employer to have great
difficulty retaining and even attracting necessary employees.  Many
businesses do not have the luxury of redundant workers waiting in the
wings, much less the ability to hire people simply to “lighten the load”
on existing staff.  This is a time for many of great privation, where
local businesses have great difficulty even opening their doors, let
alone having the ability to increase compensation to “retain or
compensate valuable employees appropriately”.  Business hours reduced or
even businesses closed permanently, without the luxury of “raising
taxes” to cover the short fall.  There was no real justification for the
City or the County to increase the local tax burden by gaslighting the
community over the inability to provide “vital” services when two years
later neither has been able to do anything more than “business as usual”.

Let’s be honest now when I say there is nothing about community “safety”
or “vital services” that has changed since both the City and the County
received the additional sales tax revenue. Increasing employee pay does
not equate to better service and hasn’t.  Gas lighting the community by
making token road “repairs” on highly visible streets that should be far
down any list of work to be done, is the height of hypocrisy.  Spending
thousands of dollars in signage to advertise this folly should be
grounds for instant removal.

Policing with more equipment and raw inexperienced “new” hires does
nothing to qualify as retaining officers nor improve “vital” services.
Moving Animal Control to the Sheriff’s department is nothing more than
taking a troubled department and making things worse to justify the
expenditure of Measure “R” funding, and the planner, code enforcement
officer, and grant writer are pure luxuries no one else in the community
can possibly afford.  The idea that both the City and the County bought
into the notion that hiring seven people to replace the Fire Chief will
make any difference in the ability of local volunteer fire departments
to respond to emergencies is bereft of any common sense what so ever.

Then there is emergency services, which has been expanded to multiple
chiefs, with literally no real task in hand that makes sense to have a
fully staffed department with no day to day emergencies to to occupy
time.  What in the world is the County thinking, or perhaps not
thinking, when the need for this luxury does not truly exist.  Surely
there is a better more economical way to handle the occasional crisis
emergency without a full time staff.  I am truly at a loss for words
over this extravagance.

I have spent a great deal of verbiage on the megalomania of the City’s
Council over thirty million dollars to be spent on Beach Front Park and
Front Street that appears to be falling on deaf ears.  The folks in the
City should realize that this gesture affects everyone in the County and
will for years to come unless the mess is terminated by the removal of
Measure “S” funding.  It is unlikely to bring a total halt to this
misguided attempt to encumber the City for years to come with the
“unintended consequences” of the massive funding requirement all the
“new” features will require in the future.  It does not pay for itself
and it will only get far more expensive as time goes on.  Those that
approve of this folly are likely to see the City’s population continue
to decline and the burden become more onerous.  Think carefully when you
cast your ballots in November.  A “YES” on Measures “U” and “T” will go
a long ways towards leveling the playing field between government and
the rest of us.