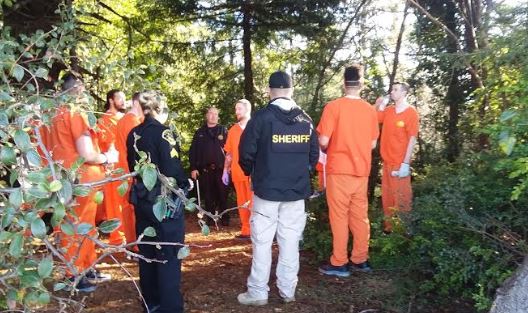 This morning, 15 Del Norte County jail inmates and eight Del Norte County probationers removed tons of long-standing accumulated trash from a County-owned parcel next to the Wal-Mart parking lot in Crescent City. Take a Bite out of Blight founder Del Norte County District 1 Supervisor Roger Gitlin coordinated the multi-Agency effort for this morning’s successful effort which removed approximately 2.5 tons of blankets, shopping carts, food wrappers, mattresses and other accumulated debris. This was the 45th Take a Bite out of Blight effort since 2013. The first effort was on this very site when volunteers conducted a successful cleanup. Sadly this pristine area has been re-assaulted and besmirched over the last five years.  Sheriff Erik Apperson praised today’s effort and promised more clean-ups on government property by inmate worker crews.

Thursday, Pelican Bay Worker crews will assist Cal Trans in abating accumulated trash on the 101 Median greenbelt. That project is the second effort on what plans to a once per month project.
Take a Bite out of Blight will continue to coordinate and conduct neighborhood cleanups on public and private property. Del Norte County Sheriff, Probation and CDCR will meet in the near future with Cal Trans Staff to discuss additional projects in extending labor to remove trash from the State Right of Ways in Del Norte County.

3 thoughts on “Another clean-up”