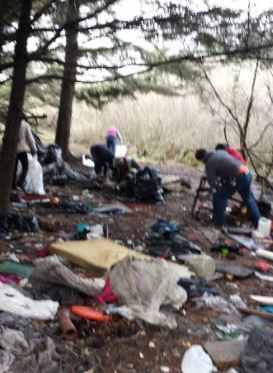 It was 9:30 am and I arrived 1/2 hour late unloading my wheelbarrow, rake and shovel. Already four dozen people were hard at work. Heavy, black plastic garbage bags were provided.  I didn’t know most of the people that came to clean-up. It wasn’t easy work either.  For example, tugging and pulling wet, filthy sleeping bags out of the dirt laden with cans, broken glass, batteries and other junk. Then shlepping the bags and wheelbarrows to the dumpsters. There was nothing salvageable. I know.  I love to reclaim usable stuff. I asked some younger people how they heard about the clean-up and many said from a posting on Facebook.  Some of the young men were connected to the Church of Later Day Saints.

From the English Standard Version of the Holy Bible – HEBREWS Chapter 10: Verses 24 and 25: “And let us consider how to stir up one another to love and good works, not neglecting to meet together, as is the habit of some, but encouraging one another, and all the more as you see the Day drawing near.”

After an hour and 15 minutes I was pooped and went to say good-bye to Roger Gitlin.  “Hold it,” he said; “everybody get in front of the dumpster and let’s get a picture.”

“Supervisor Gitlin and I want to thank these groups for an amazing clean up of the property on the East side of Hwy 101 South along South Beach; The Amateur Radio Club, the Inter Faith Council, Team Wal-Mart, Team Home Depot, The Surfriders, Crescent Act Hardware, Recology, and the “Take a Bite Out Of Blight Group.” This could have not been accomplished without these community minded individuals who said, “We want to live in a cleaner community and we’re willing to do the things that will make it happen.”

At 8:30 am this morning the place looked like this: Absent from the clean-up were 3 supervisors:  Lori Cowan, Chris Howard and Gerry Hemmingsen.

Active in the clean-up were candidates for District 3 and 4; Jake Smith and Dave Mason.

Let’s face it, cleaning up garbage is a no-brainer. Just show up and pick up trash. Well, let’s give credit where credit is due.  Roger Gitlin coordinated with Fish & Wildlife, Recology to get bins, Home Depot and WalMart for supplies and volunteers and more. But, for a moment  just try to imagine what could be accomplished with issues like Last Chance Grade, Sutter Coast Hospital, Homeless, Economic Development,Un-maintained roads, and of course Blight if four Supervisors were working together instead of three battling with and denigrating the other two.

It’s time for a change.  Time to clear out and clean up our Board of Supervisors so we can turn our jewel of a town into something special.

2 thoughts on “Another Successful Clean-Up!”