At Long Last, McCarthy Secures Speaker of the House 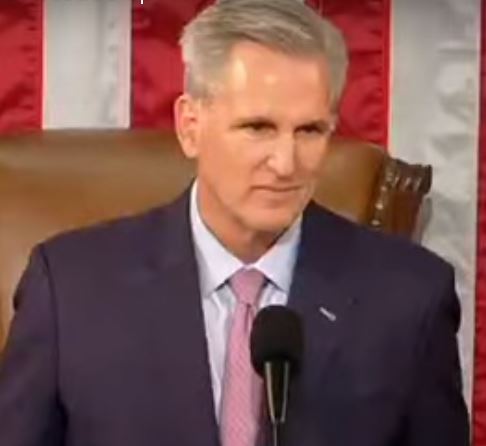 It only took four days and 15 rounds of voting.

I was just about to write off Congresswoman Lauren Boebert (R- CO) as she seemed to be an appendage to Rep. Matt Gaetz, the one who spearheaded the opposition to McCarthy.

Nothing like this has happened for 164 years when in 1923, it was Senator Frederick H. Gillett of Massachusetts, a Republican. that went through a similar situation. On the ninth ballot, he was elected. Prior to that, in 1859 it took 44 ballots to elect William Pennington of New Jersey and took over eight weeks. He was a freshman Congressman and a Republican.

In the 14th ballot at 11 pm Friday night, McCarthy was still short. A two minute confrontation took place between McCarthy and Gaetz as McCarthy walked down the aisle and exchanged words with Gaetz. Afterall, McCarthy made all the concessions they were asking for. But did they support him? No. Instead of supporting him outright, they voted “PRESENT” instead along with 4 others. Out of 428 possible votes, he clinched the position with 216.

In the wee hours of Saturday morning, we got a Speaker of the House.

But how did he get there without the requisite 218 votes?

By have the holdouts voting, “Present.” What does that even mean?

Here’s how that works. The speaker is elected by a majority of members voting “for a person by name.” 218 votes are not necessary if (a) fewer than 435 members attend the vote, or (b) members who are present opt not to vote for someone by name — i.e., if those latter members vote “present.”

Hakeem Jeffries (D-NY) Handed over the gavel to McCarthy after thanking Nancy Pelosi for all the good she did. I say GOOD RIDDANCE to Nancy Pelosi. She help to divide the country, ruin our economy and followed an addled brain President. Once the gavel was in McCarthy’s hands, he gave an excellent first speech. Republican members of congress stood and applauded numerous times while Democrat members of congress sat in stony silence. If Hakeem Jeffries was a real leader, he would have stood as well and insisted on his fellow Dems to follow. But there you go. More mickey mouse antics that only continue to keep our country divided.

What points did McCarthy made? His commitment to America before party politics.

Safety – “…where law enforcement is respected…”

Freedom – “…where children come first and are taught to dream big…”

Government built on checks and balances – “It’s time for us to be a check and provide some balance to the President’s policies.”

At which point he got a second standing ovation….. by Republicans. Understandable that Democrats would not agree.

He made more excellent points, however the thing that got my attention was this:

“Our very first bill will be to repeal the funding for 87,000 new IRS Agents.”

I say, it sounds like a very good beginning.

He can thank Trump for his support in helping to secure the Speaker position, which I’m sure he did.

FROM THE DESK OF LAUREN BOEBERT:

“House conservatives delivered a massive victory for the American people by fundamentally changing the way Congress will operate.

Here’s what I hope America saw this week:

1. The first one has nothing to do with politics. It’s this: A few voices can make a big difference. This isn’t just about politics. If you’re a mom or a student, a truck driver or a server, if you believe in something and will stand by that belief, you can make a meaningful change.

2. Congress has been broken. From the way we spend money to the way Pelosi consolidated power to the Speakership, it’s broken, and House conservatives are working to fix it.

3. It’s better to get things right than to get them quickly.

4. When Congress actually functions as intended, when we’re all on the Floor debating a path forward, the result is far better for the American people than when governing is done behind closed doors.

This past week we all delivered on the promises we made to our constituents. They told us Congress is broken, and we promised to work on fixing it. We’ve done just that. But we’ve got more to deliver on. We will work to close the southern border, increase domestic energy production, lower government spending, curb inflation, and so much more.

From the Speaker’s office to my more moderate colleagues, even those I’ve exchanged some tough words with, we will all work together to deliver conservative solutions on these issues for the American people.

But fighting to fix Congress, that’s doing exactly what we promised.“

McCarthy  said he is “1,000%” confident he will serve out his term, even with the new one-person threshold on the motion to vacate.