Backlash by France Against ISIS 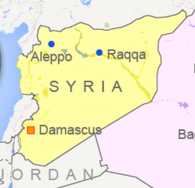 Credit to ABC News and Telegraph.UK.com –

The city of Raqqa is the de facto capital of  ISIS  in the Northeastern part of Syria.

While the French Interior Minister, Bernard Cazeneuve, has been quoted as saying that they will dissolve the mosques where hatred is preached, ten French fighter jets were launched into Syria from United Arab Emirates and Jordan. Their goal, take out 1.) a command post, 2.) jihadist recruiting center and 3.) a weapons warehouse.  The US military command helped coordinate the airstrikes.

Because it’s so hard to get reliable information out of Raqqa, news reporters have tenuously had confirmation from locals on the ground that jets did indeed fly over and bomb.  ISIS is stating nothing was damaged or destroyed in contrast to the French claiming they dropped 20 bombs and hit their targets. A Raqqa’s activist group claimed that no civilians were killed or injured in the airstrikes.

Israel shares a border with Syria:

During the Six Day War in 1967, Israel captured the Golan Heights from Syria.  The United Nations considers that territory Israeli occupied, while Israel considers it their territory.

In September this year, Israeli Prime Minister Benjamin Netanyahu met and spoke with Russian President Vladimir Putin.  Their discussions were to coordinate military actions over Syria in order to avoid accidentally trading fire.

Last year, Netanyahu was furious with France, Spain, Sweden in recognition of the state of Palestine.  So infuriated that Israel recalled their Ambassador from Stockholm, Sweden.

“The State of Israel is the homeland of the Jewish people, the only state that we have, and the Palestinians demanding a state do not want to recognise the right to have a state for the Jewish people,” Netanyahu told members of Israel’s growing Jewish community from France.

Israel is the only place in the world that is recognized as a homeland for Jewish people. From Israel’s oldest daily newspaper, Haaretz (founded in 1918 and is now published in both Hebrew and English) and The Jerusaleum Post, Israel spy services is helping French intelligence on the Paris attacks.

Although ISIS is the obvious target having claimed responsibility for the Paris attacks, don’t for a second forget that most of the Arab nations desire is to see Israel/Jews destroyed.

Islam extremists want to see the “infidels” of  Western Europe and America destroyed. Don’t confuse the issue that Arabs and Muslims are one and the same. There are about 21 Arab nations found in Northern Africa and the Middle East.  To be ARAB means:

Although most Arabs are Muslims, about 10% are Christian.

Most Muslims are not Arab. Only about 18% are.  Most Muslims live in Indonesia and India.

Most Arabs that are Muslims are divided between Sunni and Shia. The division started in 632 AD when Mohammed died.  It had to do with the succession. Sunni’s believed his successor should be elected. Shia’s or Shiites believed it should remain in the family and there has been conflict ever since.