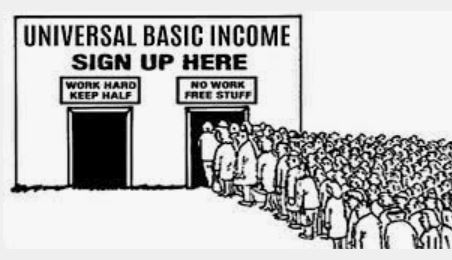 It would appear that those in charge in Sacramento have lost their
minds.  While this is a leftist and therefore Democrat idea, the State’s
Republican legislators were in lock step with their Democratic
counterparts in its passage, Limited Universal Basic Income.   No matter
how it is crafted and soft peddled, it is an idea that makes no sense at
all.   The current rendition, which has already been tried and found
wanting in a number of foreign and domestic situations on a trial basis,
has no real redeeming features and shown no change in outcome for those
that receive the State’s welfare.  While the current version passed in
the State’s Senate 36-0 and in the Assembly 64-0 has certain
limitations, there is no evidence that either branches of government
understand what a bad idea this truly is.

The State’s leadership, including our empty suited Governor Newsom, are
set to embark on a path to “rescue” pregnant women, and foster children
to the tune of between $500 and $1,000 per month at a cost to
California’s taxpayers of $35 million for this program.  In order to
shield the bumbling fools at the Capitol, the onus for distributing the
cash has been foisted off on local bureaucrats who likely will think
they have become instant Santa’s.  Naturally that neatly avoids the
problem for Sacramento when the program fails to provide the expected
outcomes and places it at the feet of local “do gooders”.  The program
will continue for several years at increasing cost only to be quietly
allowed to fade away after years of dismal results.

Following the cheer leading from California’s Democratic lawmakers and
suitable meaningless comments when Newsom signs it into law, the next
push by Democrats will be to expand the program to all Californians,
then on to the Nation as a whole.  Of course the money to pay for such a
grand gesture is non existent at the State level, let alone nationally.
Along with the lack of money to pay for such programs are other problems
which include who will be willing to work when it becomes unnecessary?
The country, which includes California, is already suffering from a lack
of employees, once again due to government meddling.  More such as
Universal Basic Income will only serve to make that problem worse.  It
is amazing how short sighted our leadership has become when socialism
emerges as a possible “solution” to some of our existing problems.
Democratic leadership laughably suggest that this income will some how
shape the path forward for those recently emerging from time in foster
care or pregnancy, all the while ignoring the dismal failure at the
hands of educators to properly educate.  The foolishness continues with
then suggesting that monthly checks will cure all their problems and
lack of education to be successful.

For far too long Californians have been utilized as laboratory rats to
explore various left leaning fantasies which have never worked.  Many
have elected to leave the State to more sensible States to be replaced
by growing numbers of citizens and non citizens with their hands held
out for increasing levels of hand out legislation.  It is another
mechanism used by California’s current government to separate and divide
the State’s citizens and create more animus, anger and chaos.  While the
recall of the Governor would be a good start, California’s legislative
branch will remain a problem unless changes in make up are made.  The
State’s legislative core dominated by Democrats coupled with Federal
Congressmen in the mold of Jared Huffman will only serve to continue
with the kind of fantasy that Universal Basic Income will have some
faint redeeming value.  Not much Chance….

5 thoughts on “Beginning Of The End, Universal Basic Income?”