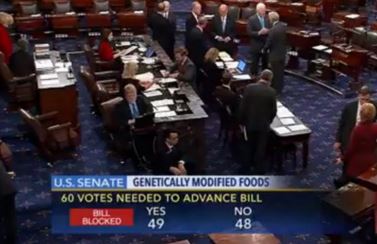 By Donna Westfall – March 16, 2016 – People want to know what’s in their food. And they want to know if their food contains any GMO ingredients. Senator Roberts’ (R-Kansas) bill which would prevent states from requiring labeling of genetically engineered (GMO) foods and stop pending state laws that require labeling from going into effect. It would have created more problems than it solved and rightfully so, the Senate voted it down.

Ken Cook, President of the Environmental Working Group (EWG) sent this and explained how the grassroots movement made this happen:

Because over 600,000 of you stood up for GMO labeling, we stopped the Denying Americans the Right to Know (DARK) Act.

The Senate’s attempt to move forward on the DARK Act today FAILED. Senators from around the country heard our message loud and clear: Americans have the right to know what they’re eating.

What happens next? We can’t be sure, but we hope that the Senate will do the right thing and move toward passing legislation to ensure federally mandated GMO labeling. This vote is a HUGE win for our grassroots movement. We went up against millions of dollars from Monsanto and Big Food and stopped them in their tracks.

We can’t thank you enough for all of your support throughout this fight, from signing petitions to picking up the phone and calling your senators and representatives. Your determination and dedication were the winning difference in this fight.

At EWG, we’re already looking toward the next fight, but after a win this big we wanted to take a moment to thank everyone who made it possible.

Thank you again Donna. We couldn’t have done it without your support.”

One thought on “Big Win Against Monsanto!”