Board of Supervisors Supports Repealing the Gas Tax 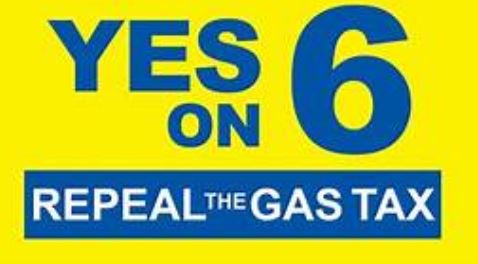 Yesterday’s Del Norte County Board of Supervisors (BOS) meeting was an interesting one. I made the motion for our Board to SUPPORT Proposition 6 which will be on your November ballot to repeal the Road Repair and Accountability Act also known as Senate Bill 1 (SB1). As you are well aware, the taxes on your gasoline rose 12 cents a gallon MORE, and diesel 20 cents a gallon MORE, AND your DMV fees were raised $25-$175 MORE to help pay for the first of ten annual installments of $5.2 billion to repair California’s roads. Folks, this is a bad law and needs to be repealed. Here’s why:

* The average financial impact on each of your vehicles is about $800 annually MORE than before SB 1was passed in 2016.

*In Del Norte County we have received $334,000 to fix our roads. Indeed, when Prop 6 PASSES (a recent California Poll shows that 58% of us in the Golden State support repeal of the Gas Tax), current projects will stop.

* I regret my vote to support SB1 after learning the impact of this terrible tax on our modest and economically-challenged County.

*75% of you Del Norte motorists cross the border to Oregon to purchase fuel at an average savings of 80 cents a gallon over the six stations which sell gas and diesel in Del Norte County. There is a huge loss of of local revenue when many of you buy other tax free items in Brookings.

*The abuse is rampant in Sacramento. In 2010, alone $1.8 billion was siphoned off the gas taxes collected at the pump in what was called the Gas Swap.We got ripped off by the State.

* California has a $16 billion surplus for fiscal year 2018/19. Use some of that surplus to pay for the roads we already paid for over the many, many years the State has been collecting gas taxes.

* This is a not a Republican or Democat issue. This is a MONEY issue that will cause great economic hardship for so many of us in Del Norte County and all the other 57 counties.

* The Board of Supervisors voted 4-1 ( Supervisor 2nd District, Lori Cowan dissenting) to support YES on Proposition 6.

I hope you will VOTE YES on 6, in November.

2 thoughts on “Board of Supervisors Supports Repealing the Gas Tax”