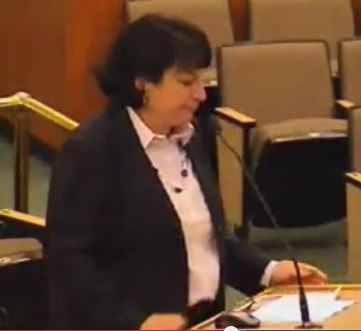 Some things are more obvious than others.  When the City approved a contract with Susan Mayer, nobody from the public paid any attention.  After all, the City needs a finance director. However, did the city need an Interim Finance Director at $7,000+/month which also included $2,000/month housing allowance?  Gotta watch this city like a hawk.  What is it about this woman that commands that kind of salary?  And, why does the City Manager think a local resident isn’t capable of providing the same service for less money?

She is certainly a YES MAN for the City.  She’s been talking up the need for increasing water rates.  She’s held court at the local Chamber of Commerce and Republican Women’s group and others.  Mayer is not a local resident and doesn’t care about the individual citizens of this community.  She is paid very well to care only about the dollar and the bottom line. The question I have for all those organizations; why didn’t you think to have the opposition there?  Are you entitled to know both sides of the story?  Is it like the fluoride issue all over again?  Are you content to keep your heads stuck in the sand?

Let’s digress for a moment.  After all there are still good questions  that have never been answered concerning fraud and corruption at the Wastewater Treatment Plant (WWTP).   But instead of answering those questions, our rubber stamping City Council of 2009 created a distraction with the censure of yours truly.  Re-read the Triplicate Letter to Editor from Former Mayor Charles Slert dated October 2, 2009.  He called me “a proactive enemy of our city.”  WHY?  Because I was “wasteful and destructive,” according to Slert.  What legacy did Slert leave behind when he left with tale between his legs,  his beautiful home on Pebble Beach in foreclosure?  His legacy was the doubling of the sewer rates and merit bonuses for city staff and a blind eye to the fraud and corruption taking place at the WWTP.  Quoting again from his letter to editor “Respect, results, bold actions and oversight, our citizens want and deserve leadership accountability of the highest standard.”

Did the public get that from the 2009 City Council?  NO! Joining Slert, Council members Schellong,  Murray and Burns didn’t think I had anything worthwhile to add to the conversation so they tried to shut me up through censure.

But, guess what? I was wise enough to start recalls against them and former City Clerk Diane Nickerson for her inability to remain neutral in counting the Prop 218 protest vote which doubled our sewer rates.  She resigned under a dark cloud.   I just hope that our current City Clerk, Robin Patch, takes that example to heart.  The City Clerk position is an elected office.  This position is to REMAIN NEUTRAL.  Is that even possible?  The City Clerk is paid by the City of Crescent City.  The City Clerk takes advice from the City Attorney, Bob Black.  Do you think that the City Clerk can remain neutral and count this water rate protest accurately and completely unbiased? That remains to be seen as the results are to be announced after having spent 5 days of tabulating over 2, 203 protests at the Special Council meeting to be held Tuesday, November 12th. I heard 800 protests were disqualified. I think the City Council should expect a full room Tuesday night.

His crime? He could no longer sit back with a blind eye to all the fraud and corruption taking place at the WWTP; and I think he went to the wrong Councilwoman.  Because if he had come to me, I would have walked into the biggest, baddest False Claims Act law firm with him to sue the bejessus off this City for hoodwinking the public.

News Flash!  The WWTP is running in the red.  Surprise, surprise.  Guess which government body is going to come back to the public with another sewer rate increase?  Why you ask? Because they may have to default on their loan.  Duh.  That sounds very similar to the water rate increase rationale, doesn’t it?  Are you content to sit back and let these idiots run over you?  Again?

Other reliable sources now state that Councilwoman Schellong is ready to walk away from her home, move to Eureka,  and leave the rest of us with her legacy of rubber stamping higher rates over the years and her tax and spend mentality. I’d like to think it was her faux pas over her email exchanges from work, using the KCRE/KPOD/BiCoastal Media company e-mail with Business Improvement District (BID) then President, Billie Kaye Gavin-Tygart and former Mayor Slert,  that got her in hot water and possibly fired or at the very least encouraged to look for work elsewhere from BiCoastal Media.

“….I wouldn’t spend a dime doing business with a lot of people in the audience last night – not because they are against BID but because they are so rude and disrespectful.  It’s not a surprise why these people aren’t doing well – they don’t know how to treat people.  I wonder why these people even have a business in our downtown.  I would imagine that if people don’t want to be in the BID district, it may have to do with the fee, but it’s probably more likely that people don’t want to be associated with a negative environment.  I’ve been beat down by these people so I can’t imagine having to be in business next door to them.”

Somehow she didn’t think through what could happen to her career by bad mouthing her own advertisers.  Why did she bad mouth them?  Because they wanted to disestablish BID. If those advertisers terminated their business relationship with Schellong, can anyone blame them?

Has the time come for the Crescent City public to terminate their relationship with Councilwoman Schellong?  Or for that matter with any of the council members who lack the skills necessary to steer this community into stability and prosperity?