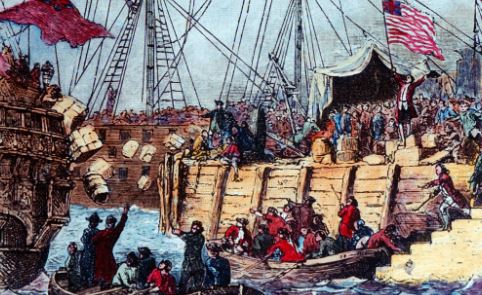 I suspect that men like Samuel Adams, Paul Revere, and William Molineux
would be appalled by what is happening in this country today.  Don’t
know who they are?  On December 16. 1773, these three men and about
sixty others moved from a meeting protesting a three shilling tax on
tea, to the Griffin’s wharf. to then board three ships in the Boston
Harbor in what is now known as the Boston Tea Party.  Over the course of
three hours, nearly 45 tons of tea chests were broken open and dumped
into the harbor’s waters thus beginning what would eventually become the
start of the American Revolution.  “Taxation without representation”
would be the rallying cry of American Patriots that led ultimately to
the Lexington Green, the commencement of hostilities, and the shot heard
around the world.

Taxation has always been a bone of contention, particularly when it is
done without dissent, or by the minority.  It is even more egregious
when the dissent is nearly as great as the approval. Our founding
fathers recognized this fact when formulating our governing documents
and attempted to insure any tax measure going forward would be favored
by more than a simple majority.  How far we have come from that simple
maxim.  Men like Samuel Adams, Paul Revere, and William Molineux would
be organizing “tea parties” without end in many of today’s states where
a tax burden is placed by citizens of the fifty percent plus one variety
on their fellow citizens.  They would be outraged by governments in this
country who initiate calls for increased taxes simply to expand
government.  We, as a people should have long ago learned the lessons of
history that more tax supported government does not necessarily mean a
better life for the country’s citizenry. Something that the “Tea Party”
participants meant as a lesson for all oppressive governments the world
over.

Yet, here we are in 2021, in a small rural community where a bare simple
majority has burdened the entire county with a 1% addition to the
already excessive sales tax by a mere handful of votes. If the money to
be collected was for absolutely necessary services it would not only
have garnered a greater approval by the voters, but be seen as something
essential to the community’s survival. But, no, it will more than likely
be used to inflate salaries, hire more bureaucrats, and generally be
wasted on non essential government glad handing, parties and travel.

The participants of the original “Tea Party” meant their activity to be
a message to King George and the British Parliament that taxes that did
not serve the interests of those taxed were to be opposed.  Over the
course of the following year and a half British parliament and the King
were to learn just what that meant. Continued resistance to British
attempts to bring the colonies to heel resulted in the American
Revolution.  Hopefully in this county, opposition to the recent increase
in sales tax will simply mean putting it to the test on a more equal
playing field where County government doesn’t put their “thumb on the
scale”.