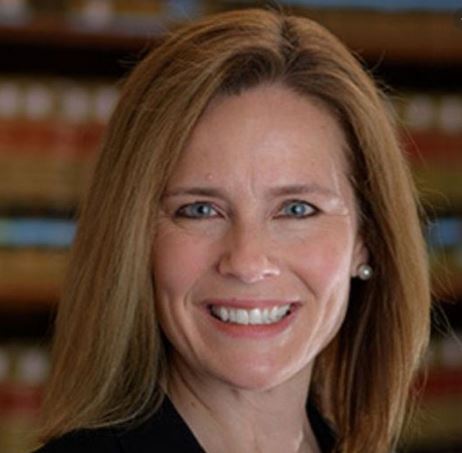 All Democrats voted against her confirmation.

The only Republican to vote NAY = Senator from Maine, Susan Collins who expressed her concern about pushing this confirmation through so close to an election.  Senator Collins has been in office since 1997.

This has been called the fastest confirmation nomination proceedings in modern times following the death of the late Justice and liberal icon Ruth Bader Ginsburg last month.

(Washington, DC) – Judicial Watch President Tom Fitton issued the following statement in response to the Senate confirmation of Judge Amy Coney Barrett as Associate Justice to the United States Supreme Court:
Justice Amy Coney Barrett’s confirmation is a great victory for the U.S. Constitution. It is another great victory for constitutional government. Most Americans agree with Justice Barrett that the Supreme Court should apply the law as it is written and leave the legislating to the people’s elected representatives.

“I have spent a good amount of time over the last month at the Senate; both in meetings with individual senators and in days of hearings before the Senate Judiciary Committee. The confirmation process has made ever-clearer to me one of the fundamental differences between the federal judiciary and the United States Senate, and perhaps the most acute is the role of policy preferences. It is the job of a senator to pursue her policy preferences; in fact, it would be a dereliction of duty to put policy goals aside.

By contrast, it is the job of a judge to resist her policy preferences. It would be a dereliction of duty for her to give in to them. Federal judges don’t stand for election, thus they have no basis for claiming that their preferences reflect those of the people. This separation of duty from political preference is what makes the judiciary distinct among the three branches of government. A judge declares independence not only from Congress and the president, but also from the private beliefs that might otherwise move her. The judicial oath captures the essence of the judicial duty; the rule of law must always control.

My fellow Americans, even though we judges don’t face elections, we still work for you. It is your Constitution that establishes the rule of law and the judicial independence that is so central to it., The oath that I have solemnly taken tonight means at its core that I will do my job without any fear or favor and that I will do so independent of both the political branches and my own preferences. I love the Constitution and the democratic republic that it establishes, and I will devote myself to preserving it. Thank you.”

The Height of Delusion

Look at the birds of the air; they do not sow or reap or store away in barns, and yet your heavenly Father feeds them. Are you not much more valuable than they?
Matthew 6:26

The Height of Delusion

Help save this beautiful cypress tree in front of the pool