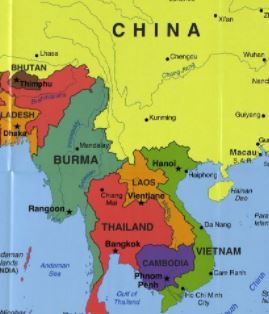 If you look at the map, the country in green marked Burma bordered by China and Thailand, is the size of Texas and has about 60 million people. People that could ostensibly be living a much richer life except for the fact that the military has been in control of the nation for the better part of the last 62 years.

While the US calls the country Burma, the military renamed the country Myanmar in 1989. Some of the similarities of our country and Burma/Myanmar is the fact that both were under British rule. We broke away in 1776. Burma was at war with Britain from 1824 until 1885, then under British rule until their independence in 1948.

For the last 10 years, it appeared that Democracy made a real breakthrough. Enter Aung San Suu Kyi. In 1991, she won a Nobel Peace Prize. This 75 year old woman was under house arrest for 15 years. She is a human rights activist and brought democracy to her country through non-violence. She leads the National League for Democracy (NLD). On November 8, 2020, she won the votes of 80% of the country it what was termed the freest election in 25 years after decades of military rule.

This morning, at 3 am, she was arrested in a raid by none other than the military claiming fraud in the election. Before being detained, she issued a statement urging the people of Myanmar to resist the military coup.

The problem appears to be the gains made by the November election. 396 out of 476 seats were won by the NLD. The military backed party won only 33 seats. This was supposed to mean the a democratic government would be ruling for the next five years. Instead, the military alleged that millions of irregularities took place in the voter lists which constituted fraud. The military not only arrested Aung San Suu Kyi, and several leaders in her party, but declared they were assuming power for the coming year under emergency powers granted to them under the constitution. They shut down communications by blocking or stopping phones, TV and internet. Flights were also shut down.

1.) What will Biden do? Secretary of State, Tony Blinken, is facing his first major crisis since assuming office last week. He expressed the US’s “grave concern and alarm,” according to The Guardian, and called upon Myanmar’s military to release all civilian government officials.

2.) How will China respond to this Coup? China has substantial oil and gas interests in Myanmar.

One thought on “BREAKING NEWS: Myanmar Coup d’etat. Is Democracy gone while the military takes control once again?”