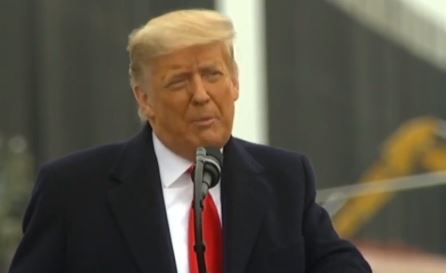 President Trump reminded the crowd that politicians have been promising for years that a wall would be built. 10 years ago promises were made to build the wall. The money was sent back and spent by the Federal government, but no wall was built.

Today, Pres. Trump said we’re celebrating a milestone; 450 miles of border wall are completed. He spoke at the 450th mile. Ongoing is another 300 miles currently under construction or pre-construction.

In the Yuma, Arizona area, that figure for illegal crossings is down by 90%.

Nationwide the amount of drugs seized by ICE and Border Patrol is 2 million pounds consisting of heroin, meth, fentanyl and other deadly narcotics.

Nearly 500,000 illegal aliens with criminal records have been arrested.