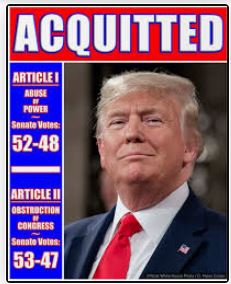 In another display of wasting taxpayers dollars, five days were spent in trying to crucify the 45th President Donald Trump.

“This has been yet another phase of the greatest witch hunt in the history of our country,” Trump said. “No president has ever gone through anything like it, and it continues because our opponents cannot forget the almost 75 million people, the highest number ever for a sitting president, who voted for us just a few short months ago.”

The previous impeachment trial against Trump lasted 21 days. Will the Democrats give up? Probably not. Let’s not forget these RINO’s that voted with the Democrats:

Sen. Richard Burr – North Carolina (has said he will not seek re-election)

Sen. Pat Toomey – Pennsylvania (has said he will not seek re-election)

In order to impeach, the Senate needed a 2/3 vote. They didn’t get it. The majority found TRUMP NOT GUILTY of inciting insurrection.