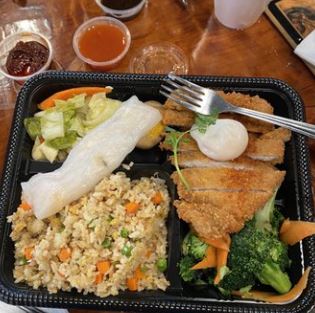 Doug and I enjoyed entering the beautifully, serene restaurant and found ourselves the only patrons. The couple that owns BaimuGarden do not speak English. We were handed a colorful menu and just had to point to the selections we wanted.

The drinks were unlike anything we had ever had before. Jellied fruit at the bottom of the container. A huge, thick straw to drink the cold liquid along with the jellied fruit. Doug would have preferred a beer.

The entrees come with either fried rice or noodles. Doug got the rice, and I got the noodles. We thought the egg rolls were delicious. The broccoli was partially cooked and crisp, just the way we like it.

The servings were generous. Fired Chicken pieces for Doug. Pork for me. Probably try other dishes next dime.

They serve them in black plastic trays with five partitions and a plastic snap-on top just perfect for take home. Thought that was ingenious.