Chamber of Commerce Luncheon May 8th 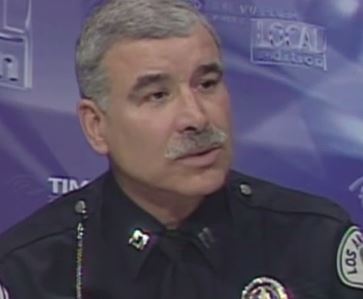 Our two handsome and charming captains of law enforcement entertained and informed a full house May 8th at First Five, about safety measures.

Sheriff Erik Apperson joined with Police Chief Ivan Minsal to talk about the importance of having cooperation with the public and making it a team effort to keep our homes and streets safe.

PC Minsal has quite the learning curve coming from Los Angeles County, so Sheriff Apperson is heping him learn the proper pronunciation of street names along with other things.

It was apparent that the two have developed a mutual respect and enjoy working together even to the extent that Minsal got Apperson to agree to join him on the golf course.  It was evident that Apperson would rather do anything else than golf.

Some of the questions from the audience ranged from theft of property, to wondering about the proper procedure to report illegal activities of officers, and what to do if you suspect someone of being a pedophile.

Repeatedly, the answers were to call it in and make a report.  That’s where everything starts. talk to the duty officer in charge.  Keep asking for a supervisor. Both officers said they were approachable. The public is encouraged to call, make an appointment or email.

Because of the James Banuelos case, Apperson addressed the issue of the stolen money shown in a video on Banuelos’ hidden camera, and took full responsibility for the operation and said the FBI is investigating.

The Sheriffs Department has a Facebook presence. Discussions are being held to create substations around town.  They’re looking for volunteers to help out.  An old time officer living in Gasquet is now on board with a vehicle which cuts down on time sending officers out to that area. Apperson is in Smith River ten times a week.

It’s reassuring to know that these two seem to want to make our place a better and safer place in which to live.  And, it’s encouraging to hear that they are serious about being responsible, accountable and transparent.