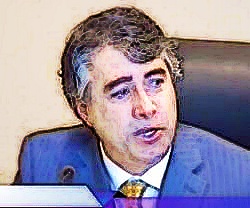 I suppose many in the County have received their copy of the latest
weekly effort by the local print newspaper, The Triplicate, to be
relevant in news produced here in Del Norte County.  Gone is the more
regular feature of a near daily print version of news in this corner of
California, yet this shadow of what once was the only game in town has
produced the ad filled version of election day entreaties for your vote
in the up coming June primary.  Of note are the well heeled full page
advertisements for local and surprise, surprise, a few State wide
candidates as well, that have appeared in the Triplicate’s “trusted and
in depth election coverage”.  Of note is that not all candidates for the
contested districts have elected to display their wares so to speak in
the Triplicate’s larger than usual print effort.  To be expected, there
is a full page rendition of current Supervisor, Chris Howard’s claim to
fame as the County’s two term representative of District ThreeOrdinarily there is not much of note in the typical effort by the
Triplicate to be anything other than bird cage liner or a source for
legal and necessary “Public Announcements”.  In this case the public
preening by Chris Howard is interesting as a testament of how few
successes have occurred during his time occupying a seat on the County’s
Board of Supervisors.  What he points too as his “successes”, remember
this is over eight years, are a multi million dollar “castle” at the
regional airport for future generations to maintain, yet ignores the
lack of a runway that is sufficient to allow utilization of much more
than a “place holder” air carrier without much opportunity for expansion
or growth to complement the “new” terminal.

The next featured “success” is high speed internet for local businesses
as if this is crucial to the meager business climate that currently
occupies the County where sales tax free Oregon is but twenty miles up
the highway to the North.  No mention of his effort to increase that tax
disparity by 1% in order to further the already steep disadvantage local
businesses have to contend with, nor the increase in the local
bureaucracy which furthers the burden already born by those same
businesses.  Nothing like highlighting a “success” that in reality is
not much more than a token nod all the while making “doing business” in
the County all that much more disadvantaged and costly.

And the next “cherry on the top of the sundae” of “successes”, Last
Chance Grade.  I believe the grandstanding prattle included something
like, “Most significantly, the great strides that have been made toward
solidifying a solution for Last Chance Grade, which is now the top
funding priority in the state.”  Oh, really? While Supervisor Howard’s
words may seem up lifting about Last Chance Grade, can anyone honestly
say that this issue has a light at the end of the tunnel?  Thought not,
just more word salad to distract from the fact that Last Chance Grade
will continue to slide in importance on the state’s “priority” list
until it falls off the side of the mountain.

To round out Mr. Howard’s blind obeisance to growing local government,
bureaucratic salaries and benefits, and “new” future maintenance
encumbrances, is his “three top priorities for the next four years”.
The list begins with his fantasy that he will have much to do with
“lowering” home owner insurance rates.  Not that that isn’t a laudable
goal, but the issue is far more complex and something a local mouth
piece like Howard will not have much to do with a solution if it is even
possible in the current realm of government induced inflation.

And then we have “funding public safety and roads” primarily through
growing the tax burden on an already over burdened public, and still
failing to accomplish the tasks outlined.  When he says, ” funding
public safety and roads”, he means adding to the already dysfunction in
local government with more is better.  Nothing about his “solutions”
actually have resulted in improving “public safety, or resurrecting the
dilapidated state of the County’s roads.  After all when your entire
time as Supervisor is spent adding new employees and paying them at a
rather generous level for this County, there isn’t much room for the
actual development of increasing “public safety or improving County roads.”

Of course there is the nod to code enforcement, emergency services and
animal control which occupies the mind of every citizen on a near daily
basis….  no doubt.  But there again, the response to the issue is not
a responsible examination of what exactly is necessary going forward,
but to hire more employees. Clearly a knee jerk reaction to something
that has not worked at all for the entirety of the near fifty years I
have lived in the County.  It is almost as if when you have a “cancer”,
Howard’s solution to deal with that problem is to give you more cancer.
Already we have a Sheriff’s department that many call “so” dysfunctional
as to be necessary to dismantle it completely and start from scratch.
How exactly are code enforcement, emergency services, and animal control
so vital to local citizens when most have little call to utilize such
services on a daily basis, yet roads do fall into that category, and
yet, have received only token attention for decades.

Nice try Supervisor Howard, but nothing more than slick political jargon
and polished rhetoric gleaned from emulating the likes of Jared Huffman,
Mike McGuire, and Jim Wood.  As they say in the real world, so where’s
the beef?  Just a little light on that part of the equation much from
where I’m sitting.

One thought on “Chris Howard, A Success Or A Mess?”