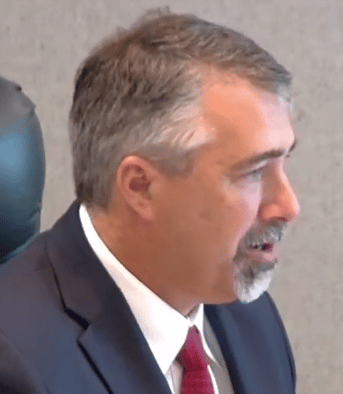 There are no camera’s, no recording devices and microphones were shut off. But there was plenty of yelling and screaming directed at me;

“You’re a liar!” screamed Chris Howard. By his side was Darren Short also representing the County who despite sending a Cease & Desist letter previously not to interrupt, felt compelled to interrupt me during my speech.

Where did this take place? At the Tri Agency Joint Powers of Authority meeting held in the Board chambers Thursday afternoon at 3 pm. Also in attendance were Wes White and Brian Stone representing the Harbor; Blake Inscore representing the City, (Jason Greenough was absent), and County Counsel Joel Campbell Blair who didn’t open his mouth to intervene in this civil rights violation.

Why did Chris Howard repeatedly scream at me about lying?

I told them The Tri Agency was defunct. DEFUNCT means, “No longer existing or functioning.”

“You’re a liar!” “You’re spreading misinformation to the community about being defunct. It is not defunct.” per Chris Howard yelling at the top of his lungs.

What does it mean that it is defunct? In the eyes of the US Department of Agriculture (USDA), I possess numerous documents that state it is defunct. I tried screaming over Chris Howard that I had all the documents in my vehicle.

He said go get them. I said I already presented them at Tuesday’s, August 23 meeting of the Del Norte County Board of Supervisors.

Now they want to have a multi-jurisdictional meeting to have 15 people agree to pay a debt by the taxpayers instead of the irresponsible business people who created the debt.

Exactly what does this mean? They want to take the organized three agencies:

Now County Counsel said there’s maybe one other option. The JPA may be able to file bankruptcy. Chapter 9 bankruptcy. He says he has to conduct some research to see if this option is available.

During the meeting Kevin Hendrick stood up and said, “Everyone knows I’m a Democrat and I’m a Socialist and I think everyone should pay for this debt.”

Thank you Mr. Hendrick for volunteering our money while 99% of us didn’t sign up to cough up this kind of dough. No one in Del Norte County benefitted from this expense.

As long as the bill is still owed, then the Tri Agency still exists, and that’s probably why Chris Howard doesn’t think the agency is defunct. Meanwhile how much are they spending each month on attorney’s fees?

Where are the agenda’s?

From April 2018 to July 2022 there were 13 agenda’s. Five years. 13 agendas. I didn’t get one today. They meet once a month. This is a clear Brown Act violation. They have to provide the public with an agenda, but apparently feel they are above the law.

Where are the minutes?

Forget the minutes. They are just as generic as the School District. They get away with it because nobody holds them accountable.

Where is the righteous indignation to make these fools come to terms with reality?