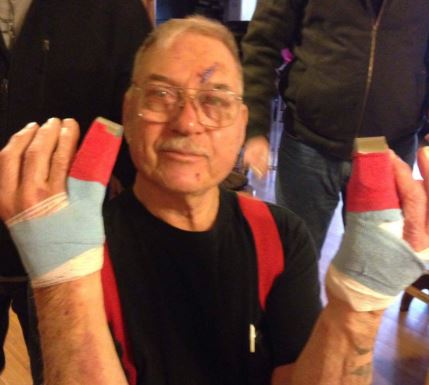 His best friends son and neighbor was booked for assault with a deadly weapon, cruelty on an elder adult, first degree burglary, and obstruction/resisting a peace officer and emergency technician.

31 year old, Christopher Joseph Gregory, was identified as the attacker.

But, there’s more to this story.  According to  his daughter, Tamara Wandelt, her father spent time in the Navy and being a musician.  He was a man of excess, but he turned his life around when a tragic accident hit home.

He lost one of his brothers and nephew in a horrific auto accident (big fuel rig/driver was under the influence), as a result, Dick turned things around and dedicated his life to the Lord.

Tamara says this about her father; “He is one of the kindest and most generous men you’ll ever meet.  His wealth may not reside in his wallet, but he has a heart of gold. He is a man of faith and serves his community by providing transportation to and from church and singing at retirement communities. As a musician, he utilizes his gift of song to help and comfort others.”

When she learned of her dad being in the hospital she completely broke down.  Then her thoughts turned to anger. She adds; ‘But, I immediately thought of how my dad would feel about that. Knowing him, he has already forgiven this man and is praying for him. That’s the kind of man my father is. He always manages to see the light in the darkest of situations.”

Fortunately, her dad is one tough cookie and was released from the hospital this morning, is surrounded by family at home while he recovers and is loving the attention of his loved ones.   His family is incredibly grateful that he will be around on January 17th to celebrate his 80th birthday.