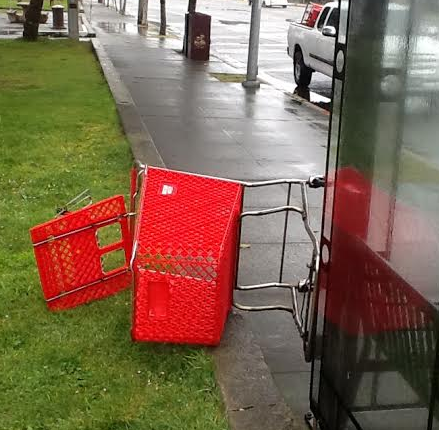 Yesterday, I sent you two pictures of abandoned shopping carts along
Front Street, one directly in front of the Chamber of Commerce office.
I observed these carts in the abandoned status for at least 48 and as
long as 96 hours ( four days). As is my practice, I picked up both
carts, one filled with unsightly trash and returned the obviously
stolen items to an overwhelmed retailer who deploys staff and
resources to retrieve his carts. I will continue to help clean up my
City.

As I have brought this problem to your attention at a recent City
Council meeting, I must not have been speaking directly into the dais
microphone because I am uncertain whether you were listening to me.  I
will try to speak up the next time I address the Council.

Mr. Mayor, a community that turns a blind eye to this kind of blight,
fails to prioritize the exigency of this    obnoxious human-created
problem shouldn’t be surprised when visitors and locals alike express
revulsion and disdain this problem in not aggressively addressed. I
know I am of that opinion and as a member of the Board of Directors of
the Chamber of Commerce / Visitors Bureau, I would think my colleagues
would feel similarly. If your response is to crack down on businesses
which offer shopping carts for the convenience of its shoppers, it
would be a very shorted-sighted response.  These retailers are
overwhelmed in attempting to retrieve their stolen property and asking
them to do yet more will only raise the cost of their product when one
goes to the cash register.

It is my hope, with leadership and resolve, you as Mayor and the rest
of Council take a more proactive approach to those individuals who
continue to act irresponsibly by stigmatizing our community as one
that doesn’t care what visitors and locals think and who express
extreme displeasure at a perceived apathetic position on the issues of
abandoned shopping carts and blight in general.

Writing as a citizen and voter in the City of Crescent City, I am
Most Sincerely,