Cleaning Up Graffiti and Blight In Crescent City 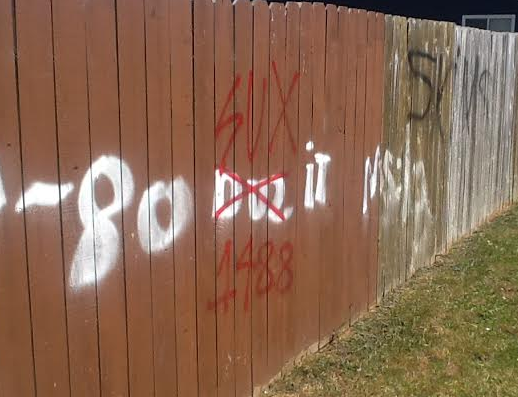 Every year before the 4th of July, our City gets cleaned up.

Wouldn’t it be nice if our city felt pride of ownership and were as invested in keeping it nice and clean year round for all of us that live here? In a  series of email communications sent to Mayor Ron Gastineau, the City Council and City Manager by Supervisor 1st District, Roger Gitlin, asking that graffiti and blight be cleaned-up, you’ll discover that his missives went mostly unanswered.  Gitlin has spent his time in organizing volunteers, spending money from donations to his “Take A Bite out of Blight” program to pay to haul it to the dump, and calling up business owners to clean up graffiti at their stores.

Are you wondering why our city employees/Mayor and council don’t appear to be doing anything? This is nothing new.

May 4th: TO: Mayor Gastineau and Crescent City Council members:

“Since I have not received any acknowledgment from you of blight items I have made you aware of within the City, I took the initiative and located volunteers from the LDS Missions program who have offered assistance in removing long standing blight on our magnificent beach at 7th near Taylor and short term blight on 2nd St near B St.  I am hopeful you and the City Council will consider appropriate interventions to deter this criminal behavior of dumping of trash on our City Streets and the tolerance of accepting this institutional condition. The trash from an illegal campsite was also,removed and taken to the Transfer Station at expense of the Take a Bite out of Blight program.

Good Morning, Mayor Gastineau:
It is alarming this graffiti still remains quite viewable and
prominent on the back of Coast True Value Hardware on Northcrest
Drive. The Take a Bite out of Blight program expresses its deep regret
this anti-social vandalism has remained intact for several years and
action to remove this scrawl has been very slow. I will continue to
bring to your attention community intolerance for this type of
display. Current ordinance requires the owner to remove such blight in
a timely manner and in the eight months since I have brought this to
your attention, I am disappointed the City has not ” put its foot
down” and enforced existing ordinance.  It is my hope this email and
accompanying photo will not have to be dispersed to the Facebook
community. It needs to be removed forthwith, and without delay.

When can we expect Mike to have this blight removed?

“Take a Bite out of Blight volunteers and concerned citizens:
Here is the view from your vehicle as you travel North on the 101, north of the S Curve. It isn’t pretty. Un-manicured sidewalks, graffiti on the side of Safeway for several weeks, trash strewn about the parking lot and poorly maintained buildings south of the Jedediah Smith Center, with debris on the sidewalk. Is this any one individuals fault? No! Moreover, Is this the impression we want to give to the hundreds of thousands of visitors in vehicles annually traveling through Crescent City?  Earlier I said, I’m going to be stepping on toes and many will attack the messenger and not ” see or hear the message.” Tolerating these conditions though trivial to some, defines our community. For  too long, we have accepted a lower standard for reasons unknown. I ask for your support in demanding systemic changes be made in where and how we shop and what are our expectations in how our community is perceived to the visitor. And with the good work of the Visitors Bureau, we can expect more folks coming to visit in Del Norte County. Again, I fully expect to be vilified by those who are content with the status quo; however, I won’t be deterred.”

What can be perceived as a one-man blight buster is really Gitlin calling business owners to clean up.  And they are.

“And Thank you Safeway Store Manager Brian Ridgely and staff for removing this graffiti prior to the big July 4 Holiday week-end, on
the building’s north wall..Next time you’re in Safeway be sure to
thank Brian and all his staff for taking this proactive stance and
removing human-made blight. Safeway Crescent City Making a Difference and Taking a Bite out of Blight.”

“A big thanks to Mike Rossini of Coast True Value Hardware who removed the unsightly graffiti from his building facing the Dept of Health and Human Services, Saturday It’s not easy to clean up after criminals who deface and disrespect but Mike stood tall and did the right thing in removing this blight. Acknowledgement and thanks to an anonymous City official who helped facilitate the cosmetic improvement. We ALL need to be vigilant in looking for suspicious activity and call it in to law enforcement. Take a Bight out of Blight! Del Norte County and Crescent City is a little nicer looking today thanks to Coast True Value.”

When it’s not a business, Gitlin goes to the next step:

June 25th:  “It gives me great pleasure to tell you ugly gang graffiti facing Bess Maxwell School has been removed. Special thanks to Del Norte County Code Enforcement Officer Dave Mason for his great follow through in having this scrawl removed and recognition and appreciation to this stand up homeowner who helped to Take a  Bite out of Blight. The Del Norte County / Crescent City community has a zero tolerance for this blight. I urge you to call or email your elected officials and encourage each to help MAKE A DIFFERENCE  and Take a Bite out of Blight.”

4 thoughts on “Cleaning Up Graffiti and Blight In Crescent City”