Climate Change, Where Have You Been?  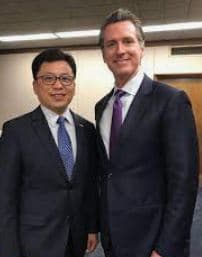 For awhile now we haven’t heard much from our esteemed governor on the
subject of “Climate Change”, as he has been too busy torturing school
age children with masks or spending time on vacation.  Looks like that
time is over as the governor grandstanded recently with the signing of
an MOU with China, the world’s largest polluter of carbon based gases on
this planet.  If there was any concern about  net zero carbon based
economies, China would be an unlikely partner, yet Newsom living up to
the moniker of the “empty suit” was in full word salad mode as he
extolled the virtues of a partnership with mainland China. Signing an
MOU with China’s Minister of Ecology and Environment on climate change
and the environment which included a “new” focus on collaboration and
strategies to achieve carbon neutrality, promote nature-based solutions,
and advance climate-resilient infrastructure must have those in charge
in China in stitches of hilarity.

During the solemn exchange of virtual signings, who on this planet
actually believes that China is ready to give up fossil fuels any time
soon.  Recent developments have them increasing their imports of both
coal and oil from Russia.    Further more, what makes Governor Hair Gel
think that he is capable of conducting international relations with a
Country that does not have our best interests at heart.  China is a
competing economy that would like nothing better than to see Newsom
destroy his state’s economy with a further “greening” of his State.
Newsom’s obsession with electric vehicles, has him claiming a “booming
ZEV market” in California where reality has EV’s representing less than
eight percent of all California’s vehicles.  He continues to fail to
recognize the tiny detail that EV’s remain beyond the wallet of most
Californians.  In the current climate of inflation, this is unlikely to
change by 2035.

In another bit of lunacy, Newsom is preparing to venture forth to Butte
County to talk about Drought response and the climate. Nothing like a
one track mind…  This event is designed to promote his “Save Our Water
Campaign” another expensive effort by the governor to promote immediate
drought response and water resiliency statewide.  His “solutions”
consist of encouraging Californians to reduce water usage, and targets
state hydropower production, in other words eliminating dams that store
water to be used for production of electricity and….. drinking water.
How thoughtful.  More concern on the governor’s part about non existent
threats to the planet’s climate and environment over providing
sufficient water for the State’s residents.

While none of the governor’s recent “Climate” concerns will result in
anything that remotely solves a problem in the State, he is sure to be
opening the State’s wallet to assure us he has our “best Interests” in
mind.  How delightful, but we were probably better off when he was “On
Vacation”.  Now that Covid is temporarily in the governor’s rear view
mirror, we can be assured of his continued fixation with “Climate
Change” and all the things he can do to make life in California much
worse.  He has yet to remove his grasp on emergency powers and if there
was anything but vacuum between his ears “Climate Change” could become
his “new” emergency.  With all the problems that the State is facing, it
continues to amaze that Newsom was not removed when facing recall.
Will it take the continued obsession with greening California to finally
push Californians over the edge and rebel against the lunacy in
Sacramento?  One can only hope….