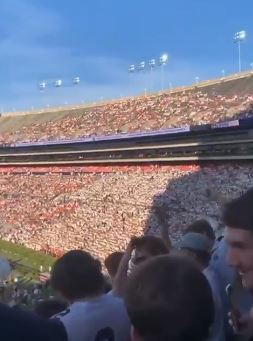 While attending high school football games at Fairfax High School in Los Angeles in the 1960’s, chants went this way to the best of my recollection:

We are the boys that eat no ham.

Those days the high school was 90% Jewish and White. I can’t recall ever attending a game that our football team won. Since being integrated their win-loss ratio improved dramatically.

Let’s turn our attention now to this past week’s college football games.

During the Auburn Tigers game against the Akron Zips, more chants of “F**K Joe Biden”.

During the Coastal Carolina Chanticleers game against the Citadel Bulldogs again the same chant.

It’s no surprise that American’s are disgusted with Biden’s mismanagement of the Afghanistan withdrawal. But college students? It’s pretty amazing after watching this past year play out with BLM, and other leftist leaning groups seemingly taking over cities and colleges with their socialistic and communistic rhetoric. Now to watch student chant anti-Biden slogans makes it appear that the pendulum is swinging in the other direction.

Hundreds of thousands of views over social media: Twitter and YouTube. Even mainstream media is covering this.

These games were played in the Southeast. Will the chant spread across the nation?

There have been 230 significant protests worldwide with 78% of them being anti-government authoritarian-leaning countries and 25 related to Covid 19.

With the way things are going in America by the Biden Administration trampling our constitution rights, it’s a wonder that more action hasn’t been taken.