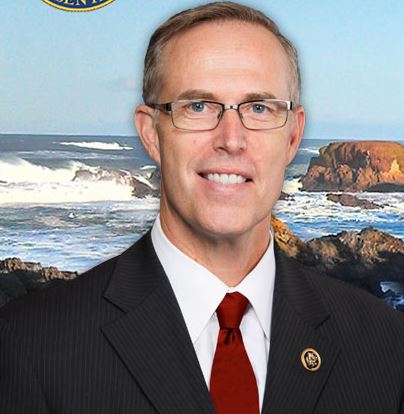 The Cresent Elk Middle School Auditorium was the location of a town hall meeeting being hosted by Congessman Jared Huffman (http://huffman.house.gov/).  The auditorium quickly filled to 3/4 capacity with concerned Del Norters eager to ask questions and have their concerns addressed.

With no preamble Huffman addessed the audience with a summary of Washington DC and Politics in general as turbulent and full of uncertainty. With critical federal budget deadlines looming later in the year priorities are flying fast and furious.  From the ‘repeal and replace’ efforts by the Republican side of the house to international actions in Syria, local, state and national issues have Congress more than busy.

Specifically in his district budget cuts to things such as Essential Air Service and getting funds for realignment of Highway 101 at Last Chance Grade are top priorities.  The larger ‘hope on the horizon’ with respect to the fiscal/economic aims of the new administration come from the ‘box’ called “Infrastructure improvements” Huffman reported that since he took office in 2012 CalTrans told him Last Chance Grade has moved ELEVEN FEET !

With that he was anxious to get direclty to the peoples questions and set about a few ‘ground rules’ – questions only last a minute and the microphones remain in the hands of his aids. He also epxressed a desire for subdued passions and a civil meeting.

The meeting appeared to be tele-recorded and may appear on the our local public service station cable CH 4.  Below are most of the questions and answers “in general.”

?: Rumors of VA being privitized. What’s your position?

A: VA not perfect. Many complaints of buracuracy but not about level of care. JH does not support privitization.

?: Question on status of “Wind Fall” Social Security – will it go away?

A: Has no news to report but consideres it a ‘terrible policy’

?: Why do we still allow transport of HAZMAT on Last Chance Grade instead
of rerouting it to I-5 and 199?

A: No answer but refer to CalTrans.

?: Thanks for support of fishermen and industry during crab season is there
any update?
A: Work  on a Marine Disaster Declaration for funds access (low cost loans).
Has broad support up and down coast but like many things faces budget cuts.
?; Hospital doesn’t pay taxes? How can that be when they charge excessive
amounts for service?
A: Sutter is a “non-profit” and working is being done to address “medical
standards.”
?: After 1929 there were subsidies aimed at reducing death rates of the
elderly due to hypothermia (heating bill subsidies), will budget cuts put
these subsidies in jepoardy? (2nd ?)  What efforts are being made
towards drug, alcohol and suicide rate increase?
A: Low income subsidies are ‘probably’ going to get cut.
Drug, alcohol, and suicide rates in addition to health care for the mentally
ill via health insurance are complex issues being addressed.
?: What is being done to support TRIO (https://www2.ed.gov/about/offices
/list/ope/trio/index.html )?
A: “Everything I can. ” Will make every attempt to attend the next “TRIO
Day” event.
?: With regards to environmental / mining / and river resource protection
how will you fight for these against an administration who disagrees with
climate change?
A: I am aware but have no knowledge of any local roll back of BHO’s EPA
policies .  The Congressional Review Acts can be tricky as once passed no further review is possible “ever.” However there are other tools, such as lawsuits, available to block undesired actions.
?: The non-profit sector feels it is under attack in Del Norte county and want to know, because it makes up such a large part of the Del Norte economy if ‘we’ have your support.

?: HR 800 is critical and needs expedition (introduced by JH calls for expansion of broadband services to rural areas: http://www.cchpca.org/federal-legislation-hr-800-new-deal-rural-broadband-act-2017)

A: Agreed. We (congress) is currently attempting to take down barriers.

?: Happy about ACA and CA expansion of health care coverage for those
without coverage. What do the democrats have as a plan to stabilize
skyrocketing drug prices and can Medicare and Medicade negotiate
coverage?
A; JH does not want obstructionist – just say no to Republicans on pricipal
but supports competition and bipartisen help. He supports a ‘public option’
and supports an early Medicare buy in approach. Having people buy into
Medicare before they turn 65 could help support the cost of medical care
for everyone.
As for Drug pricing there needs to be a return to sanity and putting a stop
to drug manufactures manipulating patents and the markets to maximize
profits.
?: Will the subsidies for Essential Air Services be cut?

A: Working to keep EAS. “An answer must be found.”

?: STEM (Science, Technology, Engneering and Math) Education is being
supported by a Washington DC “Science March”. There is increasing
focus on student loans and forgivness programs for non-profit workers.
Recently many were told the ‘deal was off” that after their service
their student loan balance will not be forgiven.
A: Am not aware of this development. Please take my card and get in touch
with me and I will look into it.
?: Muti-Billion dollar corporations are difficult to fight to control
profiteering. What can be done?
A: Agreed but in my (JH) experience the bottom line is that the community
needs to determine “what it wants.”  An example is Marin General
Hospital. The community, fed up with the management of ‘their’ hospital
took action and replaced governing of the hospital.
?: With regards to the Dakota Access Oil Pipeline will you help defend the
Klamath and plans to put a pipeline under it? Will you support the Treaties
with the indigenous peoples
A: Not aware of any plans for the Klamath but fully opposed to LNG /fossil fuel
exploration and back the “Keep it in the Ground” initiative.
?: A concerned citizen voiced his fears of international war but in the
shadow of that is an ever increasing defense budget that dwarfs the
next 7 nations combined. When will it stop?
A: The increase in military expenses does not make sense to JH. Believes
there are better ways to diffuse conflict that throwing money at it. It
comes down to a question of accountability.
?: What are you doing to protect the Latino population from Senate Bill 54
calling for CA to be a ‘sanctuary state’
A: JH does not believe people should be living in fear. Does not support
the involvement of law enforcement with ICE operations and requests
he be contacted by anyone who is aware of such actions. He noted that
he need not be contacted directly but anonymous / third party contact is recommended.
?: A Vet mentioned he’s several medical conditions that respond to
medical cannabis treatment but it is not allowed by the VA. At the other
end is the possibility of addiction to powerful opioids which neither party
wants. He’s caught in a no win situation even though California considers
it legal, the Federal government does not.
A: JH sympatheses with him and is currently working a ‘counseling option’
in the VA on the use of cannabis. Getting the current administration to
do a turn around against the Attorney Generals position probably won’t
be happening any time soon.

?:What kind of pressure can be put to expidate the Klamath dam removal?

A: Agree and applaud efforts for outdoor resources restoration and dam removal. Trying to keep everything on schedule

Also feels ‘water rights’ are not the perview of Congress’

?: Immigration Vs. crime.  People in Del Norte need to be OK with talking to the police without fear.

?: Minimum wage increase is starting to become an obstacle to critical low income support services. What can be done?

A: Will keep pushing to helping those most affected.

A: As soon as possible but things move slow in Washington DC

Short and sweet, “I enjoyed hearing your questions, and involvement. Stay in touch. Thank you. Good night. Thanks for coming.”