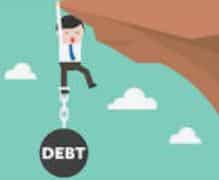 The lessons to take from this information is that Chris Howard and Darrin Short have continuously pushed our local government agencies connected to the Tri-Agency, “bail us out.” They want to use public money to get bailed out only to continue using the Failed Tri-Agency again causing more hardship to this county. Remember each of the Tri-Agency members provided no oversight, lent money to irresponsible people for “business purpose,” and then defaulted on the loans in 2018.

The Notorious Tri-Agency and their inability for oversight has been ongoing since 2012. In an article printed 11 years ago the following questions were asked and answered regarding municipalities such as districts filing Chapter 9 bankruptcy.

What happens once a municipality files for Chapter 9?

Municipal finances move into the jurisdiction of the courts, but not in the way that corporate or personal finances in Chapter 11 or Chapter 13 cases do. Under those sections, courts have broad leverage to control the finances of the company or individual to chart a path forward. In addition, creditors have more leverage, such as by foreclosing on the home of a bankrupt individual.

In Chapter 9 bankruptcy, creditors cannot, for instance, foreclose on a municipal building to recoup the money they are owed. More importantly, the courts themselves have no authority to make spending or other policy decisions on behalf of the municipality. That power remains with the locality under the U.S. Constitution. Under Chapter 9, municipalities must come up with their own debt restructuring plans, and courts approve or reject it with input from other stakeholders.

If it is still up to the municipality to come up with a plan of action, what is the purpose of entering bankruptcy court in the first place?

Bankruptcy is a last resort, but two key advantages are time and legal protection. Filing for bankruptcy gives policy makers some breathing room by changing a political process into a judicial one. It also can halt lawsuits that are likely to ensue if a municipality defaults on its debts.

What are the risks associated with municipal bankruptcy?

Local leaders shudder at the notion of bankruptcy, and for good reason.

A Chapter 9 filing immediately raises the likelihood of a credit rating downgrade and, as a result, higher future borrowing costs for the government. The damage to a municipality’s image may result in an exodus of residents or less business investment, which can hit government tax collections and make the underlying budget crisis worse.

Currently, the Tri-Agency owes the USDA $288,000.00. In a letter sent to Wes White July 21, 2021, the USDA is considering a Tri-Agency application for debt settlement. “Approval will be subject to dissolution of the Tri-agency and debt written off will be referred to the Department of Treasury for Cross Servicing and placement on the Federal, “Do Not Pay” portal as per the Debt Collection Improvement Act.”

Public workers worry about slashed salaries or benefits, and all residents could see higher taxes, loss of services or deferred maintenance on necessities such as schools, roads and bridges — although those consequences can precede bankruptcy, too. Even before Jefferson County, Alabama declared bankruptcy, it had laid off more than 500 employees, closed four satellite courthouses and reduced law enforcement services . Even Measure R won’t help this fiasco.

It depends on the size and complexity of the case. For large jurisdictions with more debt, the process can be a matter of years, not months. Vallejo, California — a city of about 118,000 that faced $50 million in debt tied to unfunded pension and other promises — filed for bankruptcy in 2008.

How does day-to-day life change in bankrupt municipalities?

This, also, depends on the size of the jurisdiction and the scope of its problems. In municipalities where residents depend a great deal on government for employment or services, the effects can be serious. In Bridgeport, Connecticut, which declared bankruptcy in 1991 (though the declaration was later voided), many residents moved away after the filing, shrinking the city’s tax base even further.