Crescent City Council Maps Out New Regulation: No Fires On the Beach. 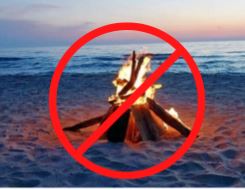 New City Ordinance that would extend the “no beach fire zone” from Battery Point to Preston Island voted on Monday, January 19th.

The subject of city regulation of beach fires has been discussed by the City Council on several occasions over the past several months.

However, as the previous council reached the end of its term and had not found a common consensus on various issues, the decision was made to allow the new council to determine and develop any regulations it found necessary.

The topic originally arose from complaints of persons living on or near Pebble Beach regarding fires along the beach that they thought were either unsafe or causing an annoyance due to conditions such as drifting smoke.

Tonight, several people spoke against allowing fires on this stretch of the beach except for property owners. The issue then became the vacation rentals whose property owners do not live here, don’t care what their renters do.

The common ground that everyone agreed upon was the fact there are miles and miles of beach throughout the city and county that can be utilized for bonfires without creating a nuisance to those who are sensitive to the smoke and without worrying about setting the brush on fire where homes reside.

4 thoughts on “Crescent City Council Maps Out New Regulation: No Fires On the Beach.”