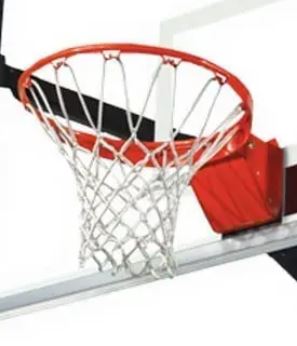 There is an old saying that goes like this, although the goods are many, the many are sometimes no good, so was the case for Crescent Elks 7th and 8th grade girls Basket ball team.

Redwood Raiders 7th grade girls basketball team consists of exactly 6 players. However, that team has more endurance, perseverance, and fight then any other team in Del Norte County.

Crescent Elks 7th grade girls basketball team consisted of 9 players. However, those nine players could not keep up with the 6 players of Redwood Raiders. During half time, the score was 16 Raiders, and 2 Crescent Elk. Each quarter the coach refreshed his team while the Raiders played with one extra.

The Raiders begin to slow down a bit during the second half of the game, but won victoriously with the final score being 22 Raiders and 13 Crescent Elk.

The second game the Raiders Coach summonsed two people from the 7th grade team to help the 8th grade team. Crescent Elk had 9 fresh players that switched off back and forth throughout the game.

At half time the Raiders again beat out Crescent Elk with a score of 16 Raiders Crescent Elk 2. Now remember the 2 extras from the 7th grade team played as extras. They were already tired from playing full on in the previous game.

Crescent Elk team changed players every quarter, those players had a hard enough time keeping up with Redwood Raiders, because Raiders are a small team and have to rely on their endurance which overwhelms Crescent Elk.

The Raiders played full on and began to show signs of getting tired but victoriously won with the final score 21 Raiders and 14 Crescent Elk.

It was a fun and exciting games to watch. I bet the Raiders Team went home tired, hungry, and ready for shower, food, and bed to begin another day of school tomorrow.