Cuban’s protesting against Communism and the song that is fueling their quest for freedom. 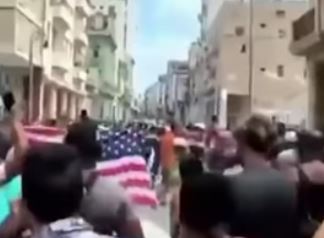 90 miles south of Key West, Florida is the country of Cuba. Fidel Castro ousted Batista in 1959. His brother, Raul Castro took over the leadership of the country upon his brother’s declining health until 2018. This year, Raul finally stepped down as head of the Communist Party ending an era of six decades of 1 family rule. At 89 years old, it’s about time. He still claims to this day, ” “As long as I live I will be ready with my foot in the stirrup to defend the homeland, the revolution and socialism with more force than ever.”

But what is happening in Cuba with protests in the streets is as much a product of the internet, growing inequality, long food lines with food and medicine shortages, electricity outages, along with a decrease in tourism affecting their economy. While (alleged) illegal President Biden’s administration may claim these protests are due to COVID, there was no shortage of American flags being displayed by the crowds chanting, “Freedom.” Because it’s FREEDOM from OPPRESSION and REPRESSION that the people of Cuba crave.

Fueling the protests is a hip-hop song called Patria y Vida — homeland and life. It’s spin-off on the communist regime’s decades-old slogan of “patria o muerte” — homeland or death. The people of Cuba are demanding change.

Biden’s Press Secretary, Jen Psaki, didn’t have much to say at first and then came out with, the people are “”exhausted with the Cuban government’s economic mismanagement and repression.” Biden put it this way, Cubans are responding to the “tragic grip of the pandemic” and “decades of repression and economic suffering.”

I find that interesting because Biden’s administration in the last six months are creating the downhill slope upon which our freedom’s are being chipped away day after day. We can see socialism at the end of his presidency, so this is just one more instance of the Democrats hypocrisy. They are expert at speaking out of both sides of their mouth, when they’re not outright lying.

Now let’s turn our attention to the Squad:

Democrat from New York – Rep. Alexandria Ocasio-Cortez (AOC). Wants single payer health system and Medicare for all. Didn’t work in Cuba, but she wants it here.

Democrat from Massachusetts -Rep. Ayanna Pressley. Staunch supporter of abortion rights and tried lowering the voting age from 18 to 16.

Democrat from Minnesota – Rep Ilhan Omar. Outspoken critic of US foreign policy and against American support for Israel.

Democrat from Michigan – Rep Rashida Tlaib. Shortly after being sworn in, she told her supporters, “”We’re going to impeach the motherf****er.” (referring to Trump).

It’s sad to hear and see American’s burning the American flag in our country, wanting our law enforcement defunded and a get out of jail free card for Antifa and BML involved in burning, murdering and looting. Little do these ignorant and ungrateful American’s realize how much worse life is under Socialism/Communism.

Their ignorance makes us want to ship them off to socialist/communist countries and exchange them for those questing and thirsting for freedom.

Our prayers are with those protestors in Cuba. We hope there is not a lot of bloodshed.