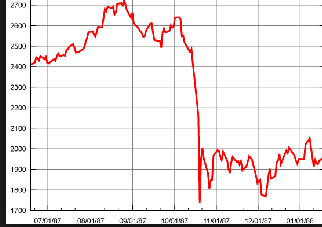 In early 1987, I spent six weeks in New Zealand enjoying the natural beauty and vegetation, friendly Kiwi’s, and their 17.25% interest rate. So, I kept my money in New Zealand banks and had them transferred back to me in the states and still made money. It was during times of high inflation and high interest rates on home loans in the US.

Exchange rates are something you become familiar with when traveling outside the States. If you go into Canada today and convert your $500 US dollars, you will receive $652.49 Canadian dollars. Today’s date the US dollar is equal to 17.17 Mexican peso’s.  That same $500 US Dollars equals $8,585 Mexican peso’s.

If you convert $500 US dollars to Chinese Yuans,  at an exchange rate of .16 to 1, you will receive about 80 Yuans. That’s as of this morning. However, today, world stock markets plunge as China’s stock market crashed.

Are you starting to get the picture?

Back to 1987.  Monday, October 19, 1987, BLACK MONDAY.  The worldwide stock market crash.  It started in Hong Kong, spread to Europe and then hit the US.  The Dow Jones Industrial Average (DJIA) fell 508 points. In New Zealand and Australia it was called BLACK TUESDAY because of the time difference.

How and why did it happen?  The simplistic answer is that our US economy was growing rapidly in 1985 and 1986.  We saw the collapse of OPEC, and a 50% decrease in crude oil prices.  On Thursday, October 15, 1987, Iran hit the American-owned supertanker, the Sungari, with a Silkworm missile off Kuwait’s main Mina Al Ahmadi oil port. The next morning, Iran hit another ship, the U.S. flagged MV Sea Isle City, with another Silkworm missile. October 19th, two U.S. warships shelled an Iranian oil platform in the Persian Gulf in response to Iran’s Silkworm missile attack on the Sea Isle City.

What happened this week to our stock market?

Those circuit breakers were put into effect.  Here’s how that works.

According to CNBC, today’s date:

Circuit breakers for the S&P 500 (Standard & Poor’s) will halt trade when the index decreases from its previous close by the following three levels: 7 percent, 13 percent, and 20 percent.

On August 11, 2015, Beijing, China announced the devaluation of the Yuan due to a sputtering economy. For the prior decade, their economy was going like gang busters.  Cheap labor being a key component. Exports a huge part of their economic growth and strength.  When that slowed down, the Chinese government started worrying and decided to devalue their currency to boost exports.

The stock market is just one indicator of how money works in our world. When something major happens half a world away, it can affect our economy. When the Twin Towers were destroyed on September 11th by Osama bin Laden and his al-Qaeda organization, our world went topsy turvy.

And it still is. Only this time, China was the impetus.