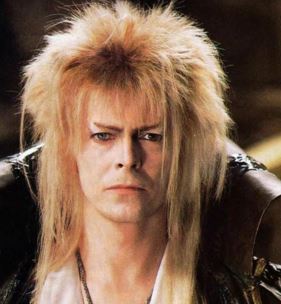 Credit to IMDB.com- January 11 2016 – “I’m looking for backing for an unauthorized autobiography that I am writing. Hopefully,

this will sell in such huge numbers that I will be able to sue myself for an extraordinary amount of money and finance the film version in which I will play everybody.”

The very versatile, very rich ($185 million as of 2005), multi-talented man that could sing, perform, act, and play any instrument has died after an 18 month battle with liver cancer. He had just turned 69 years old three days before, leaving his wife, supermodel Iman, and two children.

Acknowledged as one of the most influential writers of pop music, he was born in England, and his rise to fame was after struggling during much of the 1960’s. He finally achieved his commercial breakthrough in 1969 with the song “Space Oddity,” which was released at the time of the moon landing. Despite the fact that the literal meaning of the lyrics relates to an astronaut who is lost in space, this song was used by the BBC in their coverage of the moon landing, and this helped it become such a success.

With success came abuses of cocaine and heroine. Reports of his wasting away and appearing insane, he kicked his destructive drug habits by the end of the 1970’s, continued performing, writing, recording and added acting to his repertoire.

In the 1980’s, he recorded, “Let’s Dance,” a huge commercial success and his second  number 1 hit single in the US.

Bowie was the first sexually ambiguous British pop star, declaring himself bisexual in 1972 in a magazine article, stating he met his first wife when they were both in a relationship with the same man.  Whether or not that was true, he did break barriers but never wanted to be representative of the movement.

While performing on Live Aid in 1985, he’s quoted as saying, ” I’d do it again like a shot. This has to become an annual event. It really does. And I think a lot of us would pledge to do a show like this every year until starvation in many areas of the world, not just Ethiopia, was under some kind of control. Everybody had such a fantastic time, I’d love to do it again.”