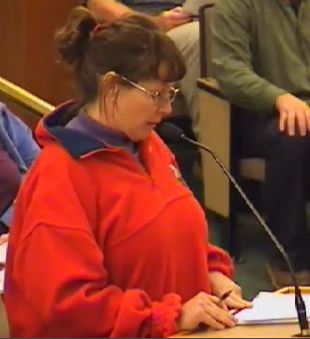 City Clerk, Robin Patch, extended an invitation to have 2 people from the group opposed to increasing the water rates observe the protest tabulation.  On Day 1 and 2, John Stetson and Linda Sutter were the observers.

Prior to the vote tabulation, County resident, Linda Sutter spoke to the City Council. During her public comment she had this to say, ” I want to gently remind you as a friend who wants to help the city obey the law and avoid litigation that the constitution requires all the protests to be considered at the public hearing which means the public gets to be present and observe.”  (Link to video available at city’s website:  www.crescentcity.org.  Linda’s comments can be watched at 4 minutes and 40 seconds. This will be put up on this website later today.)

Instead, Robin Patch, led the group to a private room.  This included Debra Wright,  from the water dept and Fritz Ludemann, IT dept; and the 2 observers John and Linda.  For an hour and 1/2, they started their tabulation then decided to stop and resume the next day.

John and Linda joined Robin, Deb and Fritz in the conference room.  At one end of the table sat the City side.  At the other end of the table sat the Observers.  During the tabulation, Robin Patch placed water bottle and coffee cup in front of her.  While tabulating, the observers had been asked and they agreed to be quiet and only observe.  No questions.  No comments.  However, during a break, Linda Sutter asked Robin if she would please remove these items so that her view was unobstructed.  Robin declined.  In addition to the 2,203 protests handed to the city, there were only a dozen or 13 protests sent or taken directly in to the city which further added to the total number of protests.

Linda Sutter had a prior commitment so a replacement observer is to be selected.  New news:  Eileen Cooper is No.2 Observer.

One thought on “DAY 3 OF PROP 218 PROTEST TABULATION”