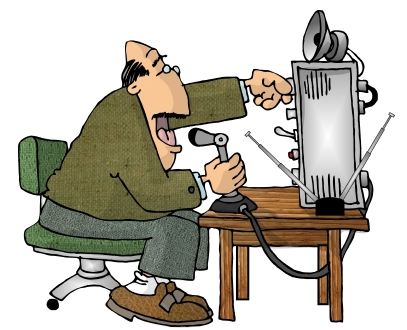 July 2010 I took my FCC Radio Operators test and became a “technician” which allows me to transmit on a ‘ham’ radio.  In the early days of amateur radio operators who were listed in the — First Annual Official Wireless Blue Book of the Wireless Association of America in 190 , by contraction of the word ‘amateur’ soon affectionately became ‘hams’ and Ham Radio was born.
There is no shortage of information online for further investigation of this fascinating hobby.  What is important for the Crescent City Times reader is
we have a local group that gathers monthly in addition for several other community functions. The Del Norte Amateur Radio Club can be found online at our club website W6HY and on Facebook.
The Club meets at the Red Cross building on Northcrest Drive the first Monday of every month at 7 PM. We also meet for ‘project nights’ the 2nd and 4th Thursdays of the month to explore the craft,  equipment, and use of radios.The Club beyond being a hobby/social club also is a disaster preparedness asset. Members regularly participate in Office of Emergency Operations and Area Operations meetings.  Members who want to be of volunteer assistance in an emergency like a tsunami become familiar with procedures and the other players like Police, Sheriff, Fire Dept, Search & Rescue, and more.
On average there are 2 “ham-cram weekends” each year when a local examiner conducts a 2 days class to obtain a license.  With a $15 deposit for a study booklet and a weekend anyone can become a ham. There will be a ham-cram test June 22-23 at the Washington Blvd Fire Protection District. If you’re interested contact Cindy Henderson at the Office of Emergency Services at the website “Preparedelnorte.com.”
KJ6JKL
Jaime Yarbrough
DNARC Vice President