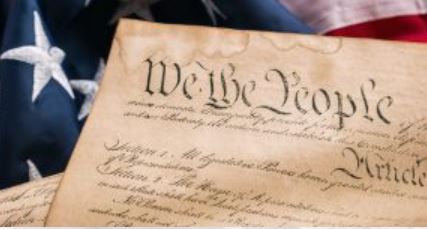 On December 16th, 1773, the Sons of Liberty dumped a cargo of tea into the harbor of Boston Massachusetts. This event is known as the Boston Tea Party. On December 16th of 2020, patriots in locked-down States across America burned masks as a demonstration of revolt against government intrusions into their personal liberties guaranteed by the United States Constitution.

Many Democrat controlled States and Municipalities across the United States have imposed draconian lock-down and business closures subsequent to the Covid-19 Pandemic. Deaths from the Coronavirus have declined to such a point that lightning strikes are more common. How do some of these Viral Deaths occur? If a person tested positive for the virus, but died from a car accident or gunshot wounds, their official cause of death is Coronavirus. Insurance companies remain exempt from paying double indemnity for natural causes like viral deaths!

Despite warnings from the World Health Organization that lock-downs have an adverse effect on Pandemic related rates of death, Democrat run States and cities in the USA remain closed. China, the origin of the Pandemic, is open for business in all but a few cities. Despite claims to the contrary, there is no scientific evidence that wearing masks or mass lock-downs curb transmission of the Coronavirus. Both Leftist mainstream media news and internet monopolists have censored any solutions to the Pandemic other than masks and lock-downs. This media blackout included evidence of Ivermectin as a 100% safe, cheap and effective preventive cure. But then, Big Pharma won’t make a ton of bucks off Ivermectin.

The Pandemic has been politicized by Marxist and Maoist opportunists to further their radical itineraries. Religious and commercial gatherings are taboo; while Antifa riots and gay bathhouses remain unhindered. They used the Pandemic to conduct the most fraudulent and compromised election in history. The conservative middle class is being sacrificed while Leftist tyranny is enforced in the name of “Public Health.” We have also had our Republic stolen out from under us.

Subsequent to a lawsuit filed by State Assemblymen James Gallagher of Yuba City and Kevin Kiley of Rocklin, Sutter County State Superior Court Judge Sarah Heckman ruled that Governor Gavin Newsom abused his authority by changing State law in violation of the California Constitution during the COVID-19 Pandemic. A permanent injunction against the Governor resulted from this ruling, preventing him from making or changing any further State Laws. This ruling happened over a month ago; what has happened since then?

In California, Patriotic Sheriffs and Police Chiefs, loyal to the United States Constitution and the rule of law, have proclaimed that they will not enforce Governor Newsom’s business closure and curfew edicts. Freeing over 40% of California’s population from draconian unconstitutional restrictions include the brave Sheriffs for the Counties of Butte, El Dorado, Los Angeles, Orange, Placer, Riverside, Sacramento, San Bernardino, Solano, Stanislaus, Sutter and Ventura. Along with these County Sheriffs we see some ballsy Police Chiefs from the Cities of Ceres, Dixon, Folsom, Roseville, Sacramento, and Stockton that likewise chose to take their oaths to the United States Constitution above the financial intimidation tactics of a Communist Governor. Where do the Sheriff of Del Norte and the Chief of the Crescent City Police Department stand?

The following proclamations are the words of a humble and irate citizen, and reflect my own determination, along with those nameless and faceless members of this community who happen to agree. I am not an elected representative of any organization or official government body, nor even a member of any club or fraternal group. I am not even a Republican, as I find our local group of RINOs (Republicans In Name Only) to be repulsive. I do not presume to have official authority, but neither did the Sons of Liberty. Not being affiliated, I stand alone as a “Son” of Liberty. None of those who won the popularity contest of elections have said what needs to be said; so I will!

This is not a time to sit back and follow orders, nor to appeal to higher earthly powers, to beg and plead for the human rights already given to us by God and guaranteed by the United States Constitution and the Bill of Rights. This is a time to DEMAND our freedom and liberty be restored. This MUST be done to salvage lives in the face of totalitarian edicts. America is a land of the people, by the people and for the people. Our State and Local Governments seem to have different ideas. For them, it is a land of the people’s tax money, by the government and for the government; and that needs to stop!

At this time, I ask that each and every one of you read the Declaration of Independence that was written in 1776. The signers of that document put their lives and personal fortunes on the line for liberty in the face of tyranny. In their case, it was taxation without representation. We have the same today, along with restrictions of movement, commerce and free speech that the Framers of our Constitution would have put up with. For one, I agree with the words of that Declaration of Independence. I have never been arrested or incarcerated; but I am willing to put my own skin in the game regarding this issue.

I do not claim to be a patriot. A patriot would do these things for love of his community. When I look at Del Norte, I see a group of people who are too lazy, disillusioned and apathetic to even attend public meetings and speak their minds. Despite being unemployed and locked in their homes, they would rather watch television or internet porn than preserve their Constitutional Rights. Do these are people deserve their Liberty? Or, do these people deserve to cower on their knees and bow their heads to Gavin Newsom and their new Communist overlords? I am not doing this for my community. I am doing it because I am pissed. If nothing is done, I will be forced to move away!

So, here’s some wishful thinking…

Welcome to the Del Norte Constitutional Autonomous Zone. Lacking the resolve of our Local Governments or Law Enforcement to proclaim fidelity to the Constitution, we the people will! From this day forward, the Patriots of Del Norte County vow to protect and defend the Constitution of the United States against all enemies, both foreign and domestic; even if those enemies happen to be our own Local and State Governments.

We the People of the Del Norte Constitutional Autonomous Zone respect and support Law Enforcement and Judicial processes within the bounds of the United States Constitution and the Bill of Rights. Gavin Newsom, Governor of the State of California, was found guilty of issuing edicts contrary to the Constitutions of both California and the United States. Officials within the Governments of Crescent City, Del Norte County and the State of California took sworn oaths to protect and defend the Constitution of the United State. Those that support and enforce Governor Newsom’s State Mandated Closure of businesses and freedom of movement and peaceful assembly are literally “Oath Breakers.” Any Law Enforcement or Judicial “Authority” who aids and abets these “Official” Traitors are likewise Oath Breakers. As the citizens of Del Norte appreciate the need to follow orders as a means to earn a paycheck, our government officials must likewise understand that the the “Private Sector” was forced to close with little or no compensation. While the “Public Sector”  received full pay since the Pandemic began; and managers dreamed of building amphitheaters and great public works; citizens have suffered.  Our government employees and leaders sit fat-dumb and happy while their community starves. Shame on you all!

I will remind our State and Local Tyrants that the citizens of Del Norte do have power. We can make lawful demands through petition. We the People of The Constitutional Autonomous Zone of Del Norte can demand the removal of the American Flag from Government Buildings and Offices of Oath Breakers; as not to sully our flag by association with traitors. They may fly the flag of California, the United Nations, People’s Republic of China, or Hammer and Sickle; but not the flag of the United States. We will not burn or even steal your flags; but put them in a safety deposit box til loyal government is restored.

We can likewise petition the immediate closure of our local City and County Governments due to misappropriation of resources, ignoring and often exacerbating the suffering of their people, and betraying the interests of their community to the benefit of a group of overpaid managers with six-figure incomes; not to mention their betrayal of the United States Constitution. We can likewise challenge the authority and unlawful orders of the Communist People’s Republic of California.

We the People of the Constitutional Autonomous Zone of Del Norte can petition the removal of the most parasitic and harmful branch of our Local Government. We can voice our agreement with the State of California and the teachers unions that the schools should remain closed due to the Coronavirus. In fact, we can insist that the closure of the Del Norte County Unified School District should become permanent! These facilities could be locked up and all administrators, teachers and support personnel laid-off. It has long been an act of extreme Child Cruelty and Abuse to force children to attend these Leftist Indoctrination, Sexual Perversion and Drug Trafficking Centers. Children exit these institutions functionally illiterate, mathematically challenged, historically misinformed, culturally twisted, drug addicted and morally bereft. We can seek to dismantle the Del Norte County Unified School District and re-purpose their facilities for either functional and demonstrable basic education; or as homeless shelters.

We fully expect opposition from Antifa, Black Lives Matter and other Leftist Marxist and Maoist radical groups like the State of California and our very own Local Governments. Because we are not Communists, we also expect that our peaceful protests and active revolt within the Del Norte Constitutional Autonomous Zone will be met with violence. We have the right to petition and demand that the institution of Castle Doctrine be observed throughout Del Norte for self defense against Leftist riots, looting, vandalism, arson, mayhem and targeted assassination. We reserve our rights under the US Constitution for self-defense.

We will move freely, with or without masks, at any time of day, in any open public place. We will assemble in any numbers, and any physical proximity, as we desire. We will conduct worship services and celebrate our holidays free of intrusive government interference. We will burn masks, our own California State Bear Flags, and those of the United Nations, People’s Republic of China and the hammer and sickle; while respecting the rights of others to fly their own flags. We will speak freely regardless of what our governments, controlled mass media, and the Satanic powers of this Earth demand.

For those liberals that have a problem with this movement, I will echo the words of feminist abortion supporters; “Our bodies; our choice!” If they believe a place is not safe to visit, then they can stay away. Even the Governor that proclaimed these restrictions breaks the rules with impunity, and he is getting Federal Paycheck Protection Program bailout funding for his own businesses!

God bless the Constitutional Republic of the United States. I hope a few of you feel the same.