Skip to content
Brian Dahle for Governor This Weeks News 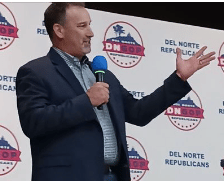 Much thanks for DNGOP Karen Sanders for bringing our Future Governor to Del Norte County. Sadly Mrs. Sanders will be retiring from her job and from the DNGOP this year. She and her husband plan to move from California.

Brian Dahle is running against Newsom for Governor and found his way to Del Norte County. A county Newsom has never heard of much less supports. Small Counties such as ours is probably not considered as chump change much less anything else to Newsom, but Brian Dahle values our importance.

One of the subject matters of interest was how Brian was able to assure the eleven counties he has worked for had FUNDED PENSIONS.

Currently Del Norte County has over $57 million dollars of UNFUNDED PENSION LIABILITY. Brian Dahle’s experience could benefit California in this respect. No one should work 20-30 years and discover their county or state cannot pay for the pension they were promised.

Future Governor Dahle expressed his concern for California. 97 Billion dollars stashed away of public dollars and Newsome has done nothing for the severe issues facing California. Dahle stated he refuses to leave the state and plans to fight to bring back California.

Lance values community and conservative values. Lance is a graduate of Brigham Young worked as a teacher than went back to school and studied Public Policy and education theory. He has worked 15 years as a legislative consultant in the state Senate. While a finance budget analysts, Lance oversaw the budget of the juvenile justice department and helped develop prop 98.

Lance noted California literacy rate is 50%. Currently California spends $128.6 Billion dollars on our children’s education which is $22,893.00 per student where 15% of black males are ready for High school.

Tony Thurmond in my own personal opinion is a waste of taxpayers dollars. I have sent him letters of concern of Del Norte Unified School District that obviously went in his circular file because not once did he respond.

The most important issue of all is to vote. We can’t make a change if we don’t participate to make that change.