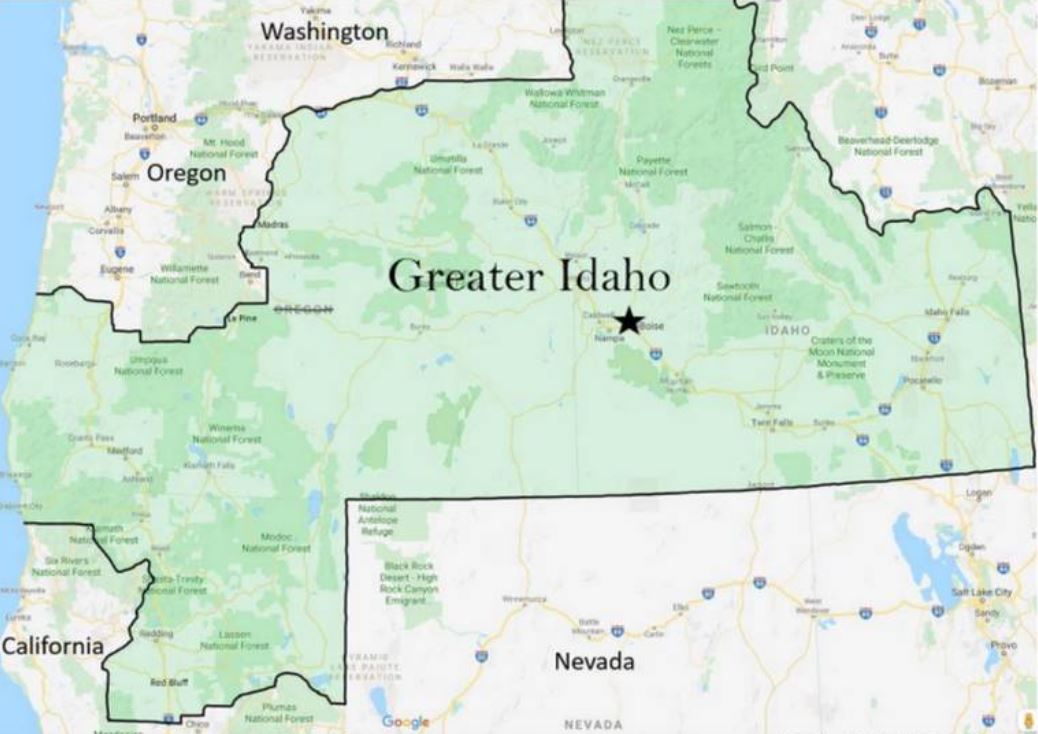 As the more obvious aspects of cultural and societal differences have
emerged in the past twenty years or so, there are multiple states,
mostly blue, that have rural parts of their states clamoring for
separation.  As urban populations have become more needy for government control, smaller rural populations chafe at the high cost of new regulation, and liberal policies being enacted to the point of near
rebellion.  Closed out from any significant representation to combat
such change foisted on them by liberal governments, many states with
substantial rural and conservative populations are turning towards
secession from what they consider as intolerable situations.  While five
counties in eastern Oregon have garnered the current news cycle as
potential candidates to join Idaho, there are similar movements in New
York, Illinois, Colorado (both eastern and western), Washington, Oregon,
and our more familiar effort in California.

The reasons for the surge in interest has long stemmed from the idea
that poorer and rural counties do not feel that State Governments in
what appears mostly blue states, have their best interests at heart.  It
has become more clearly evident in the past year as Covid-19 caused
enormous economic disruption in those rural parts of the states where
the Pandemic effected them in a very different way from urban population centers.  On the west coast in particular, State Governments have been dominated by near one party rule for some time, causing a sharp decline in the quality of life for the entire three states.  All of which has created a significant decline in the population due to high taxation and decidedly liberal policy making.

While the State of Jefferson has figured prominently in Northern
California for some time, the effort of five counties in eastern Oregon
to join with Idaho, more politically compatible, has caught on with the
ultimate goal of enlisting eighteen more counties to join in the
effort.  This would leave the liberal remaining portion of Oregon to
thirteen counties.  Proponents of the measure feel that rural counties
are outraged by the laws coming out of the Oregon Legislature that
threaten their way of life.  Mostly conservative counties, these new
laws in Oregon alarm residents and threaten livelihoods, industry, our
wallet, our gun rights, and our values.  As Oregon has turned more
liberal, in some cases out doing its southern neighbor, the counties
feel mostly ignored and increasingly alienated.  Efforts have been made
to vote liberal representatives out, but the population number continue
to be against any change.

While there are obvious benefits to both Oregon and Idaho, it still
would require approval from both the State and the Federal governments, at this point a long shot.  Not only would ultimate approval be necessary, but likely the Oregon government would loath the lost revenue from the seceding counties.  The political ramifications would be
relatively minor, Republican eastern Oregon would join, for the most
part more conservative and Republican Idaho.  The remainder of liberal
Oregon would be free to destroy itself through its current progressive
mind set.  Of course progressive Oregon couldn’t possibly let that
happen, because it may precipitate an even greater urge for many states
to split rural part from urban part, permanently disrupting the
balancing act in the Senate and House of Representatives towards a
conservative majority.