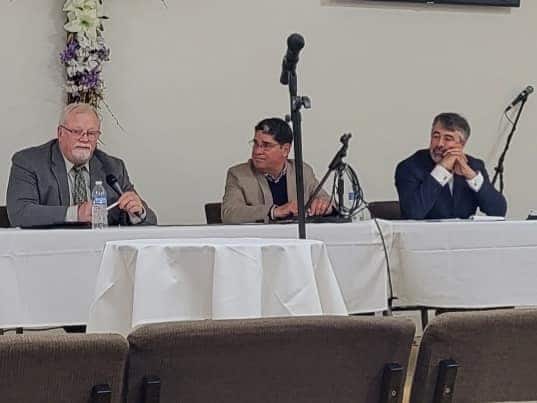 Akin spoke first, followed by Magarino and then Howard wrapping up the opening statements. Alphabetical order?

Intended or not, this small detail of who spoke when continued throughout the evening, with Howard seemingly speaking last without retort from Akin or Magarino on several hot button subjects.

* “I’m running for Supervisor to serve you.” Akin said for too long, Smith River, Hiouchi, North Bank and Gasquet residents have not enjoyed constituent representation from the current supervisor.

*”I’m a fighter. I will stand up and represent you, am accessible and not beholden to any group or anyone except you, the Public.”

* Akin acknowledged the vital importance of volunteerism in addressing community needs such as blight abatement.*Akin cited his initial support for the Measure R sales tax increase for infrastructure and law enforcement but states continued burdensome taxes are unsustainable. He embraces the Citizen- driven repeal.

* When learning Gov. Newsom may impose $1,000 per diem fines and penalties on communities which do not embrace the massive expansion of low income / no income housing, he affirmed his opposition and doubted the Governor could or would strong- arm rural communities like Del Norte.

* Akin further underscored, “We can not solve our community problems by throwing money at the problem.”

* Stated he will be a”full-time” Supervisor.

* Magarino shared his disdain referring to an L A Times article praising the welcoming conditions for the so-called homeless in Crescent City. Magarino cites that article as encouraging the throngs of LA homeless coming up or being shipped up to Del Norte County for these services. Magarino states he observes many new faces among the homeless who are not Del Norters.

* Magarino is running because change must be made for Supervisor in Dist. 3

*Howard defines his service to the young.” Youth is the most important part of my service.”

* With reference to on-going operations within the Sheriff’s Department, Howard says the Department.”needs more love.” Howard cited low morale and the difficulties in undertaking a law enforcement career.

*Howard defended his exemption from term limits stating the contacts he has developed in Sacramento and Washington are essential for Del Norte County. His absence from the Board would hurt his inexperienced colleagues, Valerie Starkey and Darrin Short.

* Howard defended the Sister City Agreement with Rikunzentakata and his family’s $25,000 personal contribution as an economic driver which, in his words,” … put Del Norte County on the map.”

* Howard staunchly supported the conversion of the Coastal Inn and Suites to Legacy, units designed for homeless and indigent individuals, located within the heart of Crescent City.

A change must be made in Dist. 3 Supervisor.

I mean no disrespect to Mr. Howard but he is clearly not understanding his negative impact on small, charming rural Del Norte County. Chris Howard never participated, not once, on a Take a Bite out of Blight or Smith River Alliance Volunteer community Cleanup.

Though exuding charm, is articulate, and knowledgeable, Howard is also arrogant, condescending, and believes he’s the smartest most important person in the room. Clearly, Chris Howard is neither.

The next and final Candidate Forums, sponsored by the Del Norte Asoociation of Realtors are