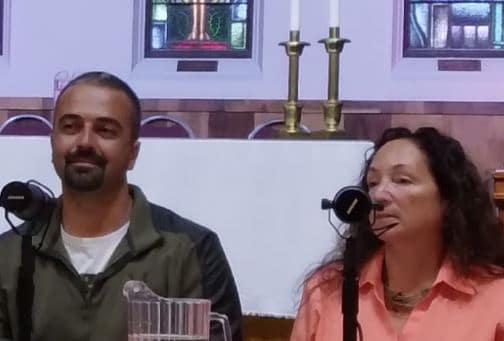 Brian Stone spoke about his long experience as a Harbor Commissioner and public/private business background.

* The need to ban flavors for teen vaping.

* Measure R sales tax increase is a benefit to the County and opposes its repeal.

* County problems are complicated and long-term and will not be solved quickly.

My analysis of candidate Stone’s retorts to panel questions is below average. Stone’s record as a Harbor Commissioner is highly suspect. He failed to mention the Commission on which he sits takes 2% of County TOT (about $100,000 per annum to pay off poor management/bad debt) decisions on which he voted for. He identified need for a full-time fire department for our growing community. Unfortunately, Del Norte County and Crescent City are not growing (-1% net loss) and the cost of a non volunteer fire department is unaffordable. Stone cites the need for additional taxes.Finally, I was disheartened why Pastor Gillport did not ask candidate Stone MY PREPARED QUESTION: why has he not physically attended Harbor meetings for the last five months, choosing to isolate himself from the Covid 19 Virus yet shows up at the Candidate forum, tonight MASKLESS.

If elected to the Board would he continue to isolate himself?

Margaret Sargent is well-intentioned in her quest for the Supervisor position but was clearly unprepared to share with the Public her views and vision on a wide variety of subject matter: Measure R, Homelessness, Teen Vaping, Jail conditions and Crime. I mean no disrespect to Ms. Sargent but her responses were without merit or apparent thought.

Patty Adams spoke of her educational and professional background. She also identified herself as the daughter of a Yurok mother. Identifying herself both as the voice and agent of change.

*As the recipient of the Del Norte County Republican Party endorsement, candidate Adams stated her adamant support of Measure R sales tax increase. Adams stated she would rely on citizen oversight groups to help her govern.

* Panalist Schmidt asked all candidates how each would recommend organizing a 200 unit low end housing grant.

Adams would separate the housing groups into permanent or transitional housing, those needing wrap around services and those who did not require these services.

Candidate Patty Adams is articulate and appeared prepared with written opening and closing statements. She did not speak from her heart. Her performance did not identify her as an agent of change but more of rubberstamp of sameness. She should spend more time speaking with her constituents rather than current and former Supervisors. Patty Adams should be doing more door knocking than soliciting advice from elected who have not made changes and continue to surrender to Sacramento and the Left.

Joey Borges, without reading any prepared statement, spoke about his entrepreneurial past and his record in becoming involved in “problem solving”. Borges has been heavily involved in youth sports (PTSO) and filling community needs.* Voted NO on Measure R and supports its repeal. Of the four candidates, Borges was the only one to declare opposition to Measure R.

* On systemic homelessness, panelist Schmidt housing question, stated, ” You can’t help those who won’t help themselves.”

*Gov’t must be accountable and transparent.

* With regard to the problem of teen vaping, Borges said the responsibility of properly raising children lies with the parents and guardians and not government.

I was impressed with candidate Joey Borges. He spoke from his heart not from prepared notes. Borges showed courage and conviction. Borges clearly dominated this debate.