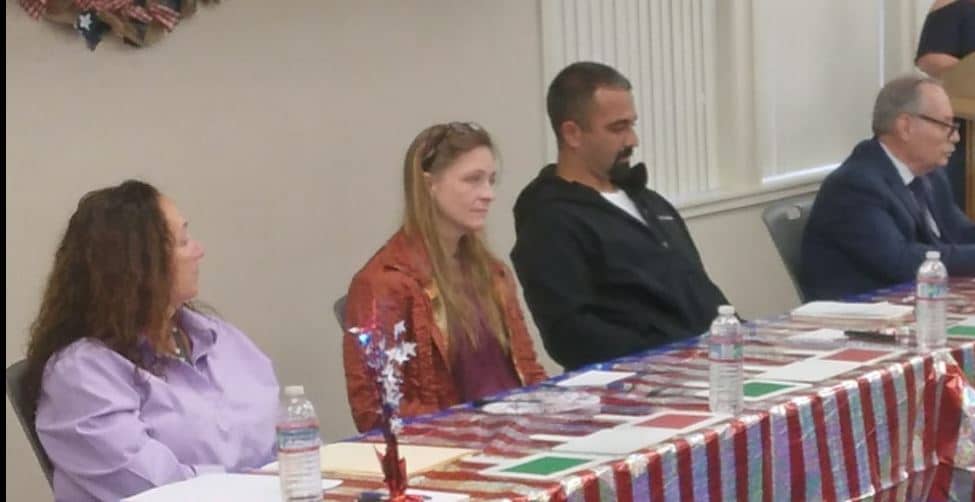 Last night was District 4 candidates Joey Borges, Patty Adams’ Brian Stone and Margaret Sargent addressing voters at the CFPD Fire Hall, sponsored by the Del Norte Realtors. The format was the same as Wednesday’s Dist. 3 forum with individual Supervisors receiving the question for two minutes, allowing follow up response from the other candidates on the dias.

PATTY ADAMS went first. The realtor delivered her bio and stated, ” Del Norte County is not broken but needs improvement..”

MARGARET SARGENT stated and repeated her theme, ” We have to work together to solve community problems.”

“Harbor Commissioner” BRIAN STONE spoke of his decades of experience in both the public and private sector and touted his success in helping save the Harbor from financial collapse during his tenure.

The Realtors asked many questions, some more timely than others. I’ll address only a few questions directed at individual candidates and the ensuing back and forth with the other candidates.

STONE was asked about attracting and retaining medical professionals to Del Norte County. Stone stated Sutter Coast Hospital should be fired. His shocking quote, ” We hear stories” was without supported documentation.

BORGES cautioned, “You better have a plan for a replacement” and indicated his support for Sutter.

ADAMS supports Sutter and if elected, will continue to work with this Healthcare provider.

ADAMS was asked is the County justified in taking over certain properties. Adams stated NEVER, then qualified her statement except for non-payment of property taxes and eminent domain needs.

SARGENT addressed a question regarding undeserving mental health needs. She referred to her compassionate side extension for the mentally ill and stated, ” It takes a village.”

Borges related to the audience his recent experience on a Del Norte Sheriff Department ride-along and how he observed deputies responding to a mentally ill young man who was taken to Sutter and after being observed by DHHS staff, was released back into the community, only to re-appear in another neighborhood, out of control, calling the Sheriff on another call.

BORGES and ADAMS both expressed support for short-term vacation rentals. STONE stated the housing shortage was aggravated by the estimated 150+ VRBO properties and he labeled vacation rentals as “Party Houses.”

BORGES and ADAMS disputed that statement. Incredibly, STONE besmirched the entire Bertch Tract neighborhood uttering, “Do you really want to live in the Bertch Tract?

ADAMS retorted, ” Beauty is in the eye of the beholder.”

Brian Stone was never at a shortage of self-praising words and was borderline boastful. His tenure on the Harbor has not been one to be proud of with a 20% (about $100,000 per year) reliance on County Transient Occupancy Tax. His personal oversight of Harbor tenants has been neglectful and fraught with his personal agenda. Also he has not physically attended a Harbor meeting in over five months, claiming his fear of contracting the Covid Virus, yet he was in attendance tonight MASKLESS.

Margaret Sargent is a lovely, compassionate citizen of our County. She has a heart of gold. Her grasp of the issues is not quite there.

Patty Adams has made progress in delivering her opinions to Dist. 4 constituents. Her outreach to voters rather than incumbent Supervisors will help her gather advocates (voters) rather than advisors.

Joey Borges was the clear winner of this District 4 forum. Borges is focused, approachable, and a quick learner. Impressive!!

Friday same time and place, the Realtors will interview Dist. 5 candidates. The public is invited.

One thought on “District 4 Candidates”