Don’t think The Cost Of Fuel Is High Enough Yet, Just Wait 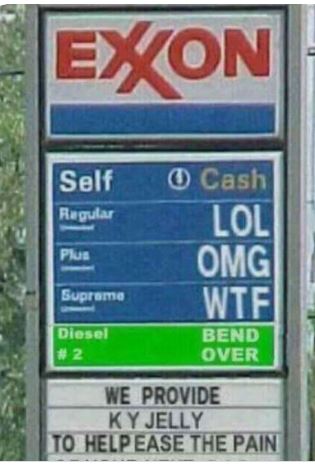 In an effort to legislate Barack Obama era executive orders into law,
the Biden Administration’s Gina McCarthy, the administration’s senior
advisor on “Climate Alarmism” has been tasked with creating more
regulation that would cut pollution from the nation’s vehicles and
factories, and continue to wreak havoc on the US economy.  It is not
that the Biden Administration hasn’t done enough to kill the US economy,
he is giving McCarthy a second bite at the apple.  McCarthy was Obama’s
Senior EPA official and had put most of the Obama era policies on his
desk.  When President Trump came along, most of McCarthy’s work went
into the round file.

Simply making the new regulations into law to withstand the further
meddling by future administrations, is not all that McCarthy intends to
accomplish.  President Ice Cream Cone has let his senior climate change
advisor off the leash and instructed McCarthy to tackle climate change
throughout the entire government and beyond.  Nothing like a little
foreign meddling to engender a little love from Greta.  Ms. McCarthy
clearly has the ego to go along with her grandiose plans.  Her target is
to reduce warming emissions by 50% over the next decade.  Maybe she
doesn’t realize two things, China, Russia, and India, three of the
world’s largest contributors to warming, are not on board with McCarthy,
and the warming is a paltry 0.4 of a degree Fahrenheit.  Oh well, more
Biden windmill tilting.  Hope he is wearing his pants….

Amongst all the climate alarmism, failed projections of looming
catastrophe, and very modest climate corrections, what could possibly go
wrong?  Oil is not only used to propel vehicles, but about a million
other essential everyday products that are used within the average
home.  Couple that with airplanes that do not currently fly on battery
power, no long range battery powered trucks, trains, or any immediate
substitutes, the supply chain seems somewhat fragile.  Enter electrical
production of which 80% plus is currently produced with fossil fuels,
ooops,  McCarthy’s plan doesn’t look very realistic.

The one thing all Americans can count on if McCarthy has her way, is
rapidly increasing costs for nearly everything.  Ms. McCarthy is an
angry senior advisor who feels slighted when her earlier work at the EPA
during the Obama years went down in flames.  She does not appear to
understand the effect that her policies had on the US economy during her
tenure.  Nothing very encouraging to see there.  Already the current
administration has had a huge negative effect on the standard of living
for most Americans, particularly those at the bottom of the economic
heap.  Ms. McCarthy’s efforts will only make it worse, far worse.
Hopefully her efforts will come to naught and Americans can trudge on
and survive under the current exploding inflation rate.

Ms. McCarthy and we already know that Ice Cream is clueless, may think
she knows how the economy works, but nobody should be holding their
breath, waiting for things to improve.  It can already be forecast as a
very long winter.  McCarthy can be guaranteed to make it worse if she
has her way….

One thought on “Don’t think The Cost Of Fuel Is High Enough Yet, Just Wait”